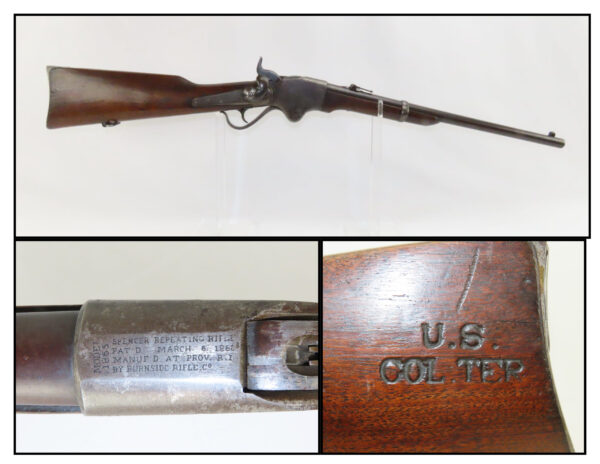 Here we present an antique Colorado Territory Marked Burnside Contract Spencer Model 1865 Carbine, made circa 1865 in Providence, Rhode Island. This specimen is one of the Burnside Contract, making it scarcer than those made by the Spencer Repeating Rifle Company. Out of the 34,000 made by Burnside, over 30,000 were purchased by the U.S. government. On October 16, 1868, 500 Spencer Carbines were transferred by the Ordnance Department to the Colorado Territory authority. This is one of those 500! The Ordnance inspector cartouches remain visible on the left side of the stock behind the sling ring bar. The left side of the butt stock has been branded “US/COL. TER” for United States Colorado Territory.

Spanning across 4 different states, the Cherokee Trail had been well traversed by 1848. A group of Native Americans were working their way towards California as they stumbled upon gold in the bed of a stream. Instead of stopping to observe what treasures they may have discovered, they simply kept moving and reported the find to the rest of the tribe when they returned home. The information wasn’t used until 1850 when William Green Russel, a California gold rusher, took a Cherokee bride. Through his newfound spouse, he heard many stories of the gold that lay in the Pikes Peak region. His first gold discovery was in Denver. It was not long after that, an estimated 100,000 gold seekers, or the “fifty-niners,” participated in one of the largest gold rushes in North America.

Thousands of people flooded into Colorado between 1858-1861 trying to find quick riches. As a result, the Colorado territory was born. This was the first time that a concentrated group of people had begun to settle the region. It was soon filled with wealth, trade, and transportation.

About this time the Civil war had begun. The Spencer was a very successful carbine that was desirable on Civil War battlefields due to its handy size, accuracy, and rate of fire. The magazine tube in the butt holds 7 shots. A captured Confederate soldier is quoted saying that you “load in the morning and fire all day!” The inventor, Christian Spencer, had the unique opportunity to personally instruct President Abraham Lincoln as he test-fired the rifle, resulting in more military sales. As the war ended, the gold rush had also slowed.

By 1865, more than 1 million ounces of gold had been found. But as a result, the Treaty of Fort Laramie had been broken. The Treaty was meant to establish boundaries and offer peace, internally and externally, among both the United States and Natives. The American miners settling on the Native’s land only exaggerated the existing conflicts between tribes. The result ended up being years of war between multiple tribes (Lakota, Arapaho, Cheyenne), the settlers & miners, the Colorado volunteers such as the 1st CO Cav, and the U.S. Government, in what is now known as the Colorado War.

The territory became a state August 1, 1876 after 15 years of political back and forth. Colorado could have been a state a little sooner if President Andrew Johnson didn’t issue a veto against the statehood in 1865. A lot of American history happened in a short span of time. Colorado played a huge role, making this rifle very special.

The overall condition is very good. Original blue finish and case colors visible. The blue has turned an even plum. Some case colors still bright while a soft gray patina has developed over the balance. The action is strong and crisp. The bore is in good shape and has retained strong, 3-groove rifling. Two cartouches can be seen on the left side of the stock. 7 uniform “kill” notches can be seen on the right side of the barrel and 9 on the left. There is a thin crack that spans from the receiver, along the top of the wrist, to the comb. There is no movement at the crack. This is a very rare opportunity to own a piece of Colorado history likely never to be seen again!