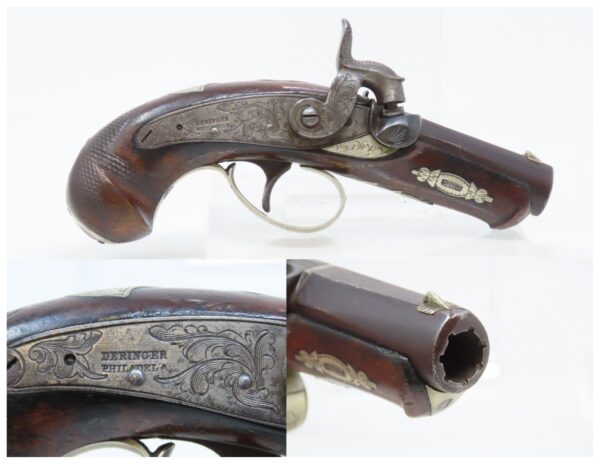 Here we present an antique Henry Deringer Percussion Pocket Pistol, made circa the 1850s in Philadelphia, Pennsylvania. This example is marked “MANd FOR / F.H. Clark & Co. / MEMPHIS TENN.” F.H. Clark & Company (also James S. Wilkins, Thomas Hill, and A.Z. Wurzbach) of Memphis was one of just fifteen authorized agents for Henry Deringer selling his famous pocket pistols. According to The Deringer in America Clark’s firm was located “at the corner of Main and Madison Streets, known as the Marble Block”. They were dealers rather than manufacturers themselves, and they dealt in legitimate Henry Deringer pistols as well as copies of his famous pistol.

Henry Deringer was a very successful Pennsylvanian gunsmith who started his own company in his early twenties, circa 1809. It was not until the 1850s that his prototypical “Deringer” percussion pistol became extremely popular. Once it did become popular, the basic design was copied in dozens of different shops. Not only was it copied, but Deringer’s good name was stamped on guns made by others, some of them not up to the quality standards of Deringer himself. The inventor was apparently very worried about protecting his good name, so he pursued and sued any of the counterfeiters that he could find and warned the buying public to beware of his spurious imitators.

The overall condition is fine. Original finish. Sharp markings and engravings. The action is excellent. The bore is very good with sharp rifling. The stock is solid. There is a cap trap in the pommel of the stock. A handsome pistol with Southern Antebellum markings!