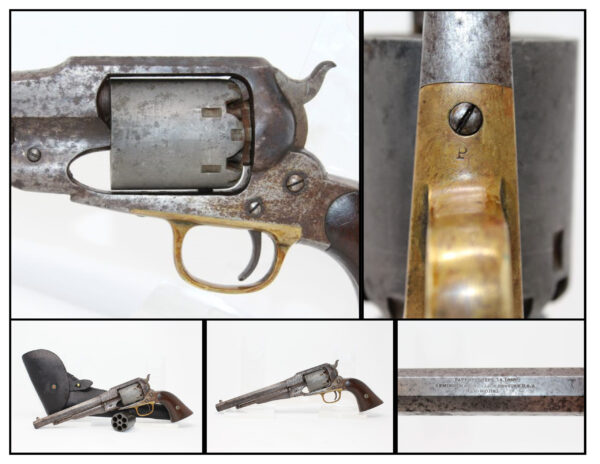 Here we present an antique Remington New Model Army Revolver, issued to a Union soldier circa 1863-64, during the American Civil War. The Remington New Model Army represents the second-most number of issued handguns found on Civil War battlefields, second only to the Colt 1860 Army. The Union government acquired a total of some 122,000 of these New Model revolvers for military use, with nearly 110,000 New Models purchased by the U.S. government during the Civil War, at a cost of around $11 each. The State of New Jersey also purchased several thousand for Civil War issue. The New Model 1863 Army represents Remington’s highest production martial pistol. It featured a strong, solid-frame design with the groove in the top for a rear sight, as opposed to Colt’s open-top design. Though Colt got the lion’s share of the government contracts, many consider the Remington New Model Army the superior firearm.

This one features government inspection marks throughout, including a cartouche on the right grip panel. The holster is nicely made and probably decades old. This one comes with a reproduction cylinder as the last owner fired this piece.

The overall condition is good. The iron parts have a mixed gray/brown patina. The markings are clear. The grips are in good condition. The bore is in good shape with nice rifling. One could really make it shine with some effort. The action is strong. The timing on the original cylinder is intermittent, hence the reproduction cylinder included. Overall, this is a great package for a Civil War revolver!