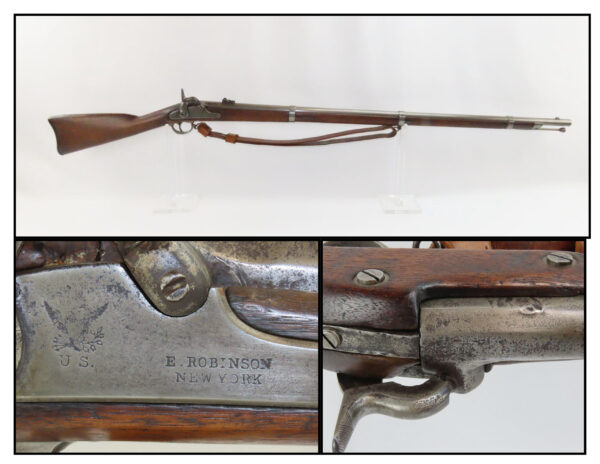 Here we present an antique Edward Robinson Contract US Model 1861 Civil War Rifle-Musket, made in 1863 in New York, New York.

The Model 1861 was the primary infantry weapon of the American Civil War for the Union. The Federal army was not prepared for war in 1861. Quite a few of its arms were in southern hands, and the two armories, Springfield, Massachusetts and Harpers Ferry, Virginia, could not make the standard rifle-musket quickly enough to supply the army. Early in the War, Harpers Ferry was captured, and the machinery was sent to the south. The result was that the Union turned to contractors. The Model 1861 was contracted out to over 20 different companies aside from the national armory at Springfield.

Compared to the total production numbers of over a million, production of the Robinson contract was limited at 24,000 making these scarce and desirable. Sometime over the years, this example has been bored out to .63 caliber.

A cartouche can be seen on the left side of the stock, “GEC”. This stands for George E. Chamberlin, Ordnance inspector between 1862 and 1879.