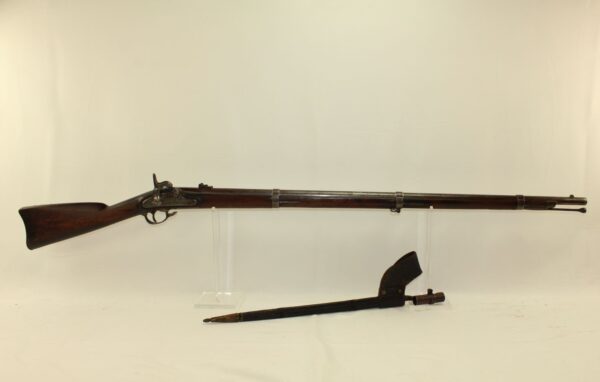 Civil War US Model 1861 with BAYONET and SCABBORD!

Here we present an antique U.S. Model 1861 Rifle-Musket, made on contract by James D. Mowry of Norwich Arms Co. of Norwich, Connecticut in 1864. Only about 22,000 of these rifles came out of this contract, quite a small number when compared to the total. The M1861 is representative of the “everyman’s” rifle during the American Civil War. About 1.5 million rifle-muskets were made in the U.S., over 800,000 of which were made by the Springfield Armory. This was the last hurrah of the rifled musket as arms development and tactics rapidly advanced during the short period of the American Civil War. Nevertheless, the 1861 represented new technology as it was made for use with the Minié ball, a hollow based, conical projectile that was small enough to quickly push down the muzzle of a rifled barrel, and expanded to create a good gas seal unlike solid, round ball.

Inspector cartouches are very clear and makes this scarce contract variant even more special. The maker has put his own stamp of approval on the rifle which reads “JAS’D MOWRY/NORWICH/CONN.” The government inspector cartouches are also very clear and are “JM” and “AJN”. Butt plate is marked “US”. The top of the stock above the butt plate appears to have been stamped “3S”. Comes with its original bayonet and scabbard.

The overall condition is Good. The action is strong. The bore is in good condition with nice rifling. This .58 caliber rifle’s lock is dated “1864” and marked with a federal eagle and “U.S./NORWICH”. The left side of the barrel has the “V/P/eagle head” proofs and dated 1864. The tip of the leather scabbard is detached, but still fits nicely over the point and appears seamless. Here is a scarce contract Model 1861 Civil War Musket with great markings!