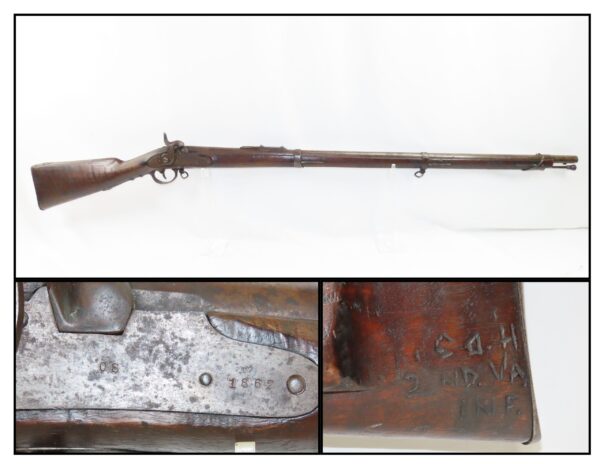 Here we present an antique Civil War Import Bavarian Model 1842/51 Rifled Musket with tribute to the 2nd Virginia Infantry, H Company at Gaines Mill. Gaines Mill (27 June 1862) was a battle that was part of the Seven Days Battles (25 June-1 July 1862), which was a part of the Peninsula Campaign (March-August 1862), during which Confederate General Lee pushed Union forces Led by General McClellan out of range of Richmond and was Lee’s first major victory of the war.

The Battle of Gaines’ Mill, sometimes known as the Battle of Chickahominy River, took place on June 27, 1862, in Hanover County, Virginia, as the third of the Seven Days Battles (Peninsula Campaign) of the American Civil War. Gaines’ Mill was an intense battle, the largest of the Seven Days and the only clear-cut Confederate tactical victory of the Peninsula Campaign. Union casualties from the 34,214 engaged were 6,837 (894 killed, 3,107 wounded, and 2,836 captured or missing). Of the 57,018 Confederates engaged, losses totaled 7,993 (1,483 killed, 6,402 wounded, 108 missing or captured) including the loss of three brigade commanders and one general officer. Since the Confederate assault was conducted against only a small portion of the Union Army, the army emerged from the battle in relatively good shape overall. Lee’s victory, his first of the war, could have been more complete if it were not for the mishaps of Stonewall Jackson. Historian Stephen W. Sears speculates that were it not for Jackson’s misdirected march and his poor staff work, the major assault that Lee unleashed at 7 p.m. could have occurred three or four hours earlier. This would have put Porter in grave jeopardy, without any last-minute reinforcements and the cover of darkness. He quotes Edward Porter Alexander, prominent Confederate artillery officer and postwar historian: “Had Jackson attacked when he first arrived, or during A.P. Hill’s attack, we would have had an easy victory—comparatively, & would have captured most of Porter’s command.”

The 2nd Virginia Infantry Regiment was an infantry regiment raised in today’s western Virginia and what became West Virginia during the American Civil War for service in the Confederate States Army. VMI professor Thomas Jonathan (Stonewall) Jackson arrived on Monday, April 29 and organized the volunteer craftsmen, laborers and farmers of the ten drilled companies into regiments, revolutionizing their notions of war in a short time. It would combine with the 4th, 5th, 27th, and 33rd Virginia infantry regiments and the Rockbridge Artillery Battery and fight as part of what became known as the Stonewall Brigade, mostly with the Army of Northern Virginia. The 2nd Virginia fought at many famous battles throughout the conflict. In addition to First Manassas, it fought at Second Manassas (after First Kernstown and Jackson’s Valley Campaign and with the Army of Northern Virginia from the Seven Days’ Battles to Cold Harbor). It reported 90 casualties at First Kernstown, 25 at Cross Keys and Port Republic, 27 at Gaines’ Mill, and 77 at Second Manassas.

This musket is thought to have been an experimental model (only an estimated 1,000 made) that was not adopted by the Bavarians and having gone through various upgrades was sold as surplus during the American Civil War. It features a rifled bore in .70 caliber with a very neat, very long-range rear sight. The sight lies flat in its default position and stands up in A-frame fashion with the rearmost portion of the leaf fitting into notches of various graduations—all the way out to an optimistic “1450” meters. There are some basic assembly markings and even matching serial numbers throughout, but there are no proof or military acceptance markings. There are some Roman numerals throughout, likely assembly numbers, as well as a “G” on the inside of the lock, a “GH” on the stuck under the butt plate, and an “M” struck on the underside of the barrel.

“CS” and “1862” are stamped on the lock. The stock was marked “GAiNES MiLL” on the cheek rest and “Co. H/2nd. VA/ INF.” just in front of the butt plate. “HH” marked at the heel of the stock. The previous owner of this musket stated that this unique musket was that issued to Private William H. H. Crim. Crim mustered into H Company 14 April 1862 at New Market, right at the beginning of the Peninsula Campaign. Private Crim has an interesting service record, showing that he went absent without leave in September of 1862, then returning in January of 1863 (whereupon he was docked 1 month’s pay). He was ill in the Chimborazo hospital for over a month before he returned to his unit. He again went AWOL in July of 1863. The record is not extremely clear, but it seems that he joined up with the 18th VA Cavalry in F Company at some point after this.

The overall condition is very good. Original plum patina. Excellent action. Very nice, sharply rifled bore. Solid stock with some subtly handsome grain. There are numbers that match throughout to include the stock (under the side plate), the barrel, and breech plug. This is a handsome rifle from Bavaria with some very interesting provenance!