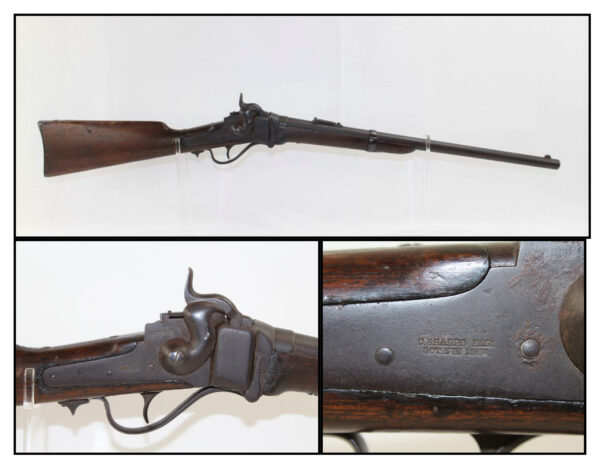 Here we present an antique Sharps New Model 1859 Cavalry Carbine, made circa 1859-63 in Hartford, Connecticut. There is a reason the good name of Sharps has lasted to the current day, reaching nearly legendary status. Those made prior to and during the American Civil War, from 1861-1865, were popular with the troops. They were handy, accurate, powerful and reliable guns, and many went to the Western Frontier as trappers, explorers and settlers moved that way.

This example was originally produced in the percussion format and used in the Civil War. After the war, in 1867, the U.S. Government paid Sharps Rifle Manufacturing Co. to update and convert about 31,000 of these to metallic cartridge for the military, the same big cartridge the early trapdoors were made in. This is one of the iconic carbines of Western lore. This particular gun was smooth bored sometime post war.

This one bears remnants of the original Civil War period inspector cartouches. The “DFC” (David F. Clark) cartouche for the metallic cartridge conversion remains clear on the left butt stock.

The overall condition is good. The iron parts are dark with age. The markings are legible. The walnut stock has clearly seen much use and is likewise dark with age and handling. The bore is now .54 and smooth and dark. The action remains strong as the Sharps name. Here is a fantastic cavalry carbine that would have seen action in the American Civil War before going on with the cavalry in the post-war period, able to handle a metallic cartridge!