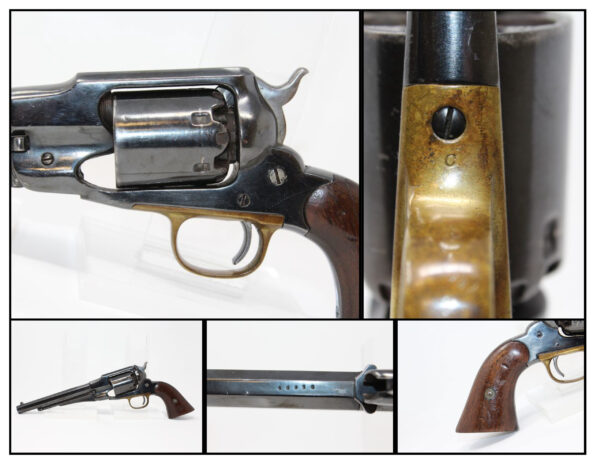 Here we present an antique Remington New Model Army Revolver, likely issued to a Union soldier circa 1863, during the American Civil War. The Remington New Model Army represents the second-most number of issued handguns found on Civil War battlefields, second only to the Colt 1860 Army. The Union government acquired a total of some 122,000 of these New Model revolvers for military use, with nearly 110,000 New Models purchased by the U.S. government during the Civil War, at a cost of around $11 each. The State of New Jersey also purchased several thousand for Civil War issue. The New Model 1863 Army represents Remington’s highest production martial pistol. It featured a strong, solid-frame design with the groove in the top for a rear sight, as opposed to Colt’s open-top design. Though Colt got the lion’s share of the government contracts, many consider the Remington New Model Army the superior firearm. William F. “Buffalo Bill” Cody used an ivory-handled New Model Army .44, serial number 73,293, from 1863 until 1906, when he gave it to his ranch foreman with a handwritten note which said that, “It never failed me”.

The overall condition is very good. The blue finish was reapplied at some point and is 95%. The markings are clear. The walnut grips show handling marks. There is a chip at the toe on the right grip and a hairline crack near the top that ends just short of the grip screw. The bore is in great shape with sharp rifling. The action is excellent, strong and crisp.