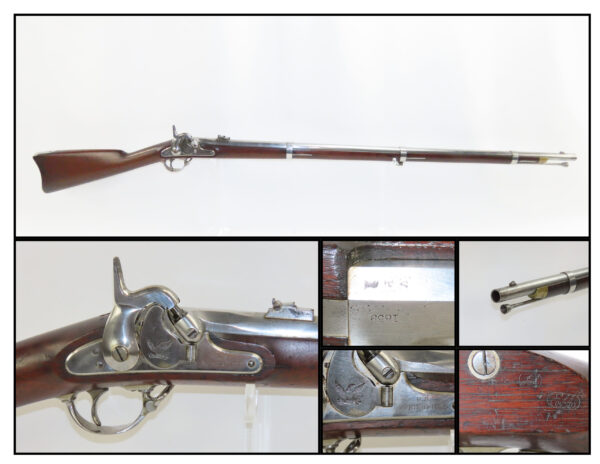 Here we present an antique Springfield Armory US Model 1855 Rifle-Musket, manufactured in 1859 in Springfield, Massachusetts. The Model 1855 was the first US musket to utilize the .58 caliber Minie ball. The US military was piloting a concept for all U.S. Army troops to have a common caliber, so that logistics would be simplified. The chosen caliber was .58, and it utilized the cutting-edge cone-shaped Minié ball with the hollow base instead of a spherical ball. Also, relatively new and short-lived was the Maynard tape priming system, to which Springfield had purchased the rights. Instead of directly priming the nipple by hand for each shot, the user would simply install a roll of paper percussion caps, and a single cap would be exposed, sheared, and carried by the hammer to detonate on the nipple. Of course, the standard rifle percussion caps could also be used. This system was simply abandoned with the beginning of the American Civil War as arms production was driven by effectiveness and efficiency, resulting in the simplified Model 1861.

Both the lock and barrel are dated “1859”. There are two clear cartouches on the left stock flat: one “ESA” for Erskin S. Allin and “JS”. This musket has been bored smooth and is.61 caliber.

The overall condition is fine. Bright steel. The action is as strong as ever. The bore is clean and remains in good shape. The stock is solid and stable throughout. The cartouches on the left wrist are clear and sharp. Here is a fantastic Springfield for the Civil War collection!