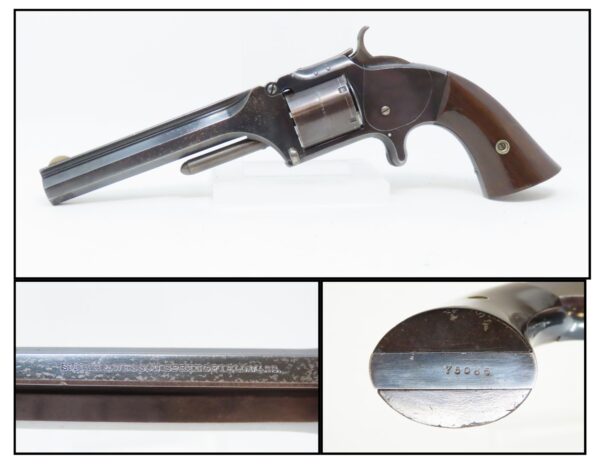 Made During the Civil War Era Circa 1863

Here we present an antique Smith & Wesson Model No. 2 Old Army Revolver, made circa 1863 in Springfield, Massachusetts. Smith & Wesson purchased the rights to the Rollin White patent for the bored through cylinder, which would forever change the development of revolving firearms. Beginning in 1857 they produced the Number 1, a 7-shot .22 rimfire pocket pistol, which was quite successful. This was fine for the commercial market, but S&W knew they could scale up their design for a pistol that could be worn on the belt in a holster. They began shipping their Number 2 “Army” Revolver, a 6-shot .32 caliber, just 2 months after the beginning of the American Civil War. Smith & Wesson continued to leverage their patent well beyond the war and they remained very popular with the public and on the frontiers. There was a total of 77,200 of these revolvers made during their production run from 1861 through 1874.

The overall condition is very fine. The blue finish that remains (95%) is vibrant and reflective. The action is strong and tight all the way around. The bore is bright with sharp rifling. Both of the rosewood grips are solid and smooth. A superb example of Smith & Wesson’s flagship revolver!