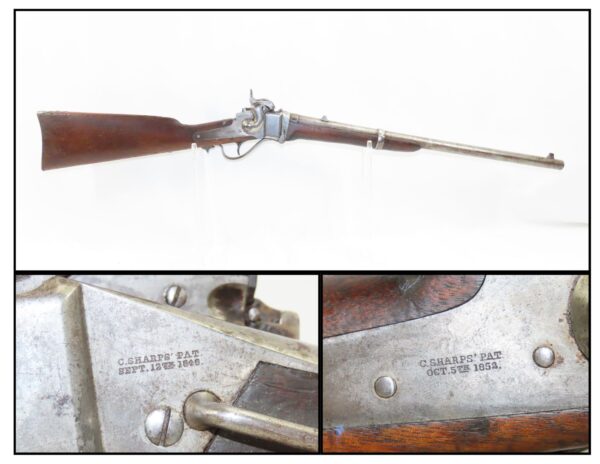 Here we present an antique Sharps New Model 1863 Carbine, made circa 1863 in Hartford, Connecticut. Sharps rifles are a series of large-bore single-shot rifles, beginning with a design by Christian Sharps in 1848, and ceasing production in 1881. They were, and still are, renowned for their long-range accuracy. The most famous, single-shot percussion firearm used during the Civil War was the Sharps carbine, a .52 caliber breech-loading. Without a doubt, nearly all of these carbines saw service with both Union and Confederate regiments and was the most widely used cavalry arm of the Civil War.

Over 100,000 Sharps rifles and carbines were purchased and used by the federal government during the American Civil War. These powerful, accurate and reliable rifles certainly saw history from a firsthand perspective during the conflicts leading up to the Civil War, the war itself, and beyond on the Western Frontier. The Sharps rifles became icons of the American Old West due to their appearances in many Western movies and books. Perhaps as a result, a number of different rifle companies currently offer reproductions of the Sharps rifle. But, here you can have the original!

The overall condition is good. Strong action. Bright bore. The stock is solid with an average amount of wear, but does contain a stable crack on the right wrist between the rear tang and the rear of the lock plate. The rear sight assembly is absent as is the rearmost tang screw. Sharp markings. The front sight blade is an ad hoc replacement. A neat piece of Civil War history!