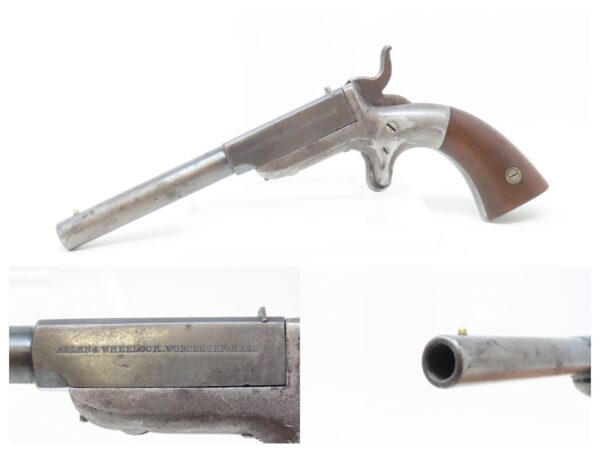 Here we present an antique Allen & Wheelock Center Hammer Pistol made in Worcester, Massachusetts circa the early 1860s. This single shot pistol is one of approximately 500-1000 manufactured by the famed gunmakers in the beginning years of the American Civil War. It comes with a 5-1/4 inch part octagon barrel that pivots to the side to load.

This was a favorite hideout deringer style pistol used by riverboat gamblers, prospectors, ladies of the night, and Civil War soldiers who wanted to carry a last ditch weapon for personal protection. There are historical articles stating that these type pistols would also be used by soldiers who were in the “field hospital” after being wounded. Rather than allowing an amputation, often the soldiers would draw a weapon to prevent the doctor from performing such a procedure. Numerous outlaws also carried these type arms for times when their primary holster revolver might have been confiscated by a lawman (the movie “Wyatt Earp” comes to mind).

Ethan Allen was a true family man, investing and partnering with a nephew in a New York sporting goods retailer, hiring another brother-in-law, Thomas Wheelock, who was eventually made a partner, and similarly hiring and later making partner his two sons-in-law Sullivan Forehand and Henry Wadsworth. This little pistol would have been made early in the Allen & Wheelock era which ran from 1856 through 1865.