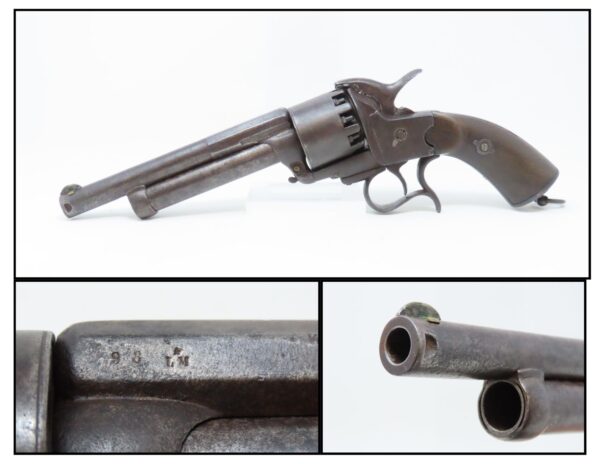 Here we present an antique Early Confederate LeMat Grapeshot Percussion Revolver manufactured circa 1862 in Paris, France. This LeMat revolver is a .42 caliber percussion revolver invented by Jean Alexandre LeMat of New Orleans, which featured an unusual secondary 16 gauge smooth-bore barrel capable of firing buckshot. It saw service with the armed forces of the Confederate States of America during the American Civil War of 1861–65.

After the U.S. patent was secured for the revolver, LeMat partnered with the Paris based Girard and Company manufacturing firm to develop the new revolver for the Confederacy. It was a 9-shot revolver coupled with a five-inch 16 gauge buckshot barrel sitting underneath the seven inch primary barrel. It was a single action mechanism that the operator needed only to push down on the tab on the head of the hammer to put the revolver into the secondary position to fire the buckshot round out of the bottom barrel. Due to the buckshot capability, the LeMat revolver earned itself the nickname of “Grape Shot Revolver” from Confederate forces. He entered into a partnership with P. G. T. Beauregard (at that time a major in the U.S. Army) in April 1859 to market his handgun to the U.S. Army. Beauregard, besides being LeMat’s cousin, was one of the first U.S. Army officers to resign and join the Confederacy.

When war broke out, LeMat received Confederate contracts for the production of five thousand revolvers, and plans were laid to manufacture the gun abroad and then import them into the Confederacy, which lacked the necessary facilities to produce the weapon locally. Confederate gun runners were able to slip shipments of the gun through the Union naval blockade into the hands of the Confederate forces. In addition to General Beauregard and Colonel LeMat, LeMat’s revolver was used by such famous Confederate officers as Major Generals Braxton Bragg, J. E. B. Stuart, Richard H. Anderson, and Captain Henry Wirz. Confederate Major General J. E. B. Stuart “was known to favor the LeMat revolver”. General Beauregard’s personal engraved LeMat, which he carried throughout the war, is preserved at the Museum of the Confederacy in Richmond, Virginia.

This one is marked with LeMat’s spangled “LM” on the right side of the barrel. The top flat of the octagonal portion of the barrel reads “COL. LeMat BTE. S.G.D.G. PARIS”. The barrel, cylinder, and frame are all numbered 98. The rammer assembly looks like it was lost long ago, perhaps after an attempt to fasten it back on via brazing with brass, which remains in the aperture, smooth with wear and dark with age. Dark patina throughout. The strain screw is a later replacement. The action is strong and there are 3 audible clicks to the mechanism. Both bores are in good shape with expected darkening from age. The grips are firm with expected surface wear and a small crack on the left while the right is missing a chip near the frame, smooth from use and age. All numbers match. A rare example of an iconic Confederate revolver born in France!