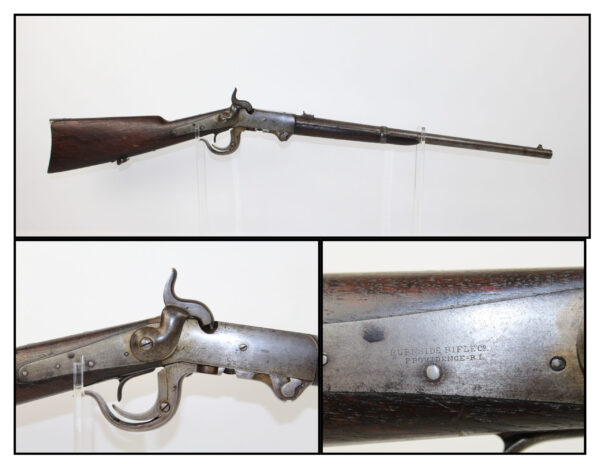 Here we present an antique Burnside 5th Model Percussion Carbine, made in 1864. This carbine was designed by the famous Union General Ambrose E. Burnside, who resigned his position in the Army to work on it. He was also the treasurer of Bristol Firearms Co., the company that made his patented carbine, prior to the American Civil War. He had the misfortune to find it necessary to sell off his shares in the company just prior to the outbreak of the war in June 1859. His misfortune did not end there. He was plagued by politics in his career in the Army, and despite success and promotion, he was quickly torn down by his enemies within the Army for any misstep. Burnside himself participated in the First Battle of Bull Run, Battle of Antietam, Battle of Fredericksburg, Battle of the Wilderness, and the Battle of the Crater.

The carbine which bore his name was unlike many other percussion carbines of the time, utilizing a copper or foil casing. This made it very easy and relatively quick to load and unload. The firearm was made in 5 distinct models with improvements being made along the way. The Burnside Carbines were one of the most prolific of all the different carbines of the Civil War numbering about 53,000 in all configurations. Among the known cavalry regiments that used them were: 1st Michigan; 3rd Indiana; 5th, 6th and 7th Ohio; 1st New Jersey; 3rd West Virginia; 3rd, 14th, and 18th Pennsylvania; 2nd, 12th, 14th, and 16th Illinois.

The overall condition is good. The metal surfaces are dark with age. The markings are clear and legible. The bore is dark with sharp rifling. The stock is in good shape and solid. The action on this carbine is strong.