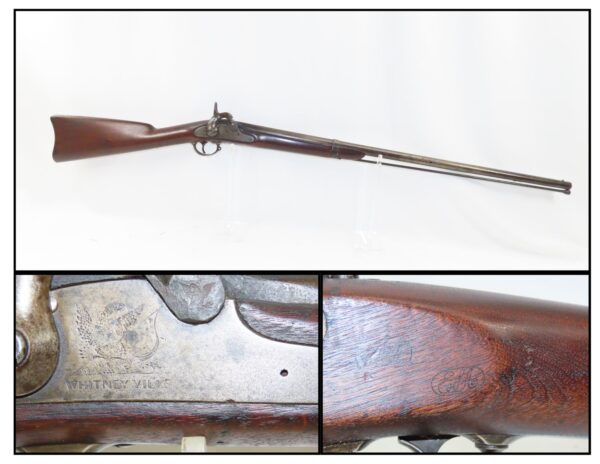 Basic Pioneer Weapon for the Frontier!

Here we present an antique Whitney Model 1861 percussion rifle-musket made in New Haven, Connecticut, in 1863 and was converted to a shotgun sometime post-Civil War. Given the surplus market for arms after the war, this would have been a very affordable weapon and tool for those going West and subsisting on the frontier. It would have offered protection as well as provided food for the table.

Eli Whitney Jr. and his family legacy, Whitneyville Armory, played a large role in providing small arms to the Union during the American Civil War. This example is one of the Rifle-Muskets provided by Whitney to the U.S. Government by contract. Most of his muskets he provided were part of his “Good and Serviceable Arms” line, which was focused on providing arms to state militias, though as mentioned, this example was part of a U.S. marked government contract. The Good and Serviceable Arms were made of large lots of parts which he purchased from the federal armories and other contractors to assemble into rifle-muskets good enough for service with the states who, unlike the federal government, had lesser standards and did not use gauges during their inspections. He wasn’t shy about this either. These arms were good enough, better to be sure than many of the muskets being bought and shipped back from Europe, and they were less expensive than had they been built from the ground up with all the gauging that went into federal contracts.

It has the “Federal Eagle” above “Whitneyville” on the front right lock with the date “1863” on the rear. Also dated 1863 on the top of the barrel. It is marked with the inspector cartouche “ESA”, for Erskine S. Allin, one of the most famous inspectors at the U.S. Armory. He began work at the Armory in 1829 as an apprentice in the Water Shops where his father Diah worked as a foreman. He rose through the ranks, and between October 1847 and May 1848 he served as Acting Master Armorer. In 1853 he was appointed permanent Master Armorer. Allin’s greatest contribution was the development of the “Trapdoor” breech mechanism which could be adapted to the existing muzzle-loading rifles.

The overall condition is good. Robust action. The bore has dimmed and remains clear. The stock is solid with less than average wear and two cartouches on the left wrist. The front ramrod lug is missing. “1863” dated lock.