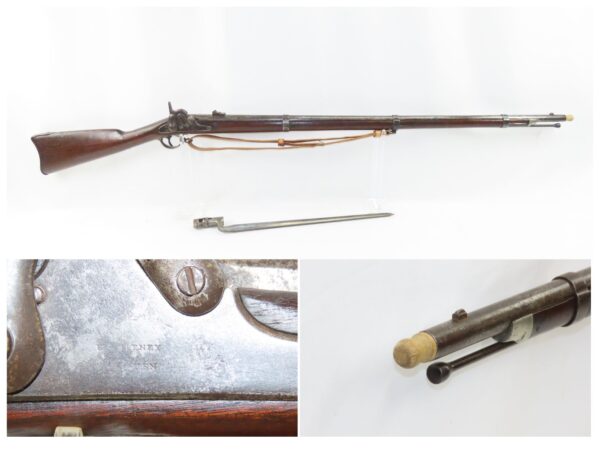 Scarce MILITIA Musket Used by the STATE of MARYLAND

Here we present an antique Whitney Variant Model 1855/1861 percussion rifle-musket with the High Hump Lock made in New Haven, Connecticut, circa 1861. Eli Whitney Jr. and his family legacy, Whitneyville Armory, played a large role in providing small arms to the Union during the American Civil War. Most of his muskets he provided were part of his “Good and Serviceable Arms” line, which was focused on providing arms to state militias. The Good and Serviceable Arms were made of large lots of parts which he purchased from the federal armories and other contractors to assemble into rifle-muskets good enough for service with the states who, unlike the federal government, had lesser standards and did not use gauges during their inspections. He wasn’t shy about this either. These arms were good enough, better to be sure than many of the muskets being bought and shipped back from Europe, and they were less expensive than had they been built from the ground up with all the gauging that went into federal contracts.

One of the rarest examples of Whitney’s “Good & Serviceable” arms was the U.S. Model 1855/61 “High Hump” Rifle Musket (Flayderman 5J-047.5). Unlike Whitney’s small batch of about three hundred and fifty U.S. 1855 pattern rifle muskets produced with functional tape primer mechanisms, these arms were assembled with “High Hump” 1855 type locks that were not completely milled and finished. Like so many of the Whitney “Good & Serviceable” arms, the guns were produced with varying features that depended upon the parts available to use in their production. In general, these arms basically followed the U.S. 1855 pattern, or more accurately the Richmond “High Hump” pattern. The un-milled tape primer locks were left at their full height with a prominent hump, and were mated to a 40-inch long, .58 caliber barrel that was secured by three flat, spring-retained bands and a tang screw. Some of the barrels were rifled with Whitney’s signature 7-groove pattern and others were rifled with the usual US 3-groove pattern.

In section 375 of George Moller’s book American Military Shoulder Arms, Volume III he notes that Fredrick Todd indicated that the state of Maryland had acquired “2,000 rifle-muskets Model 1855, cal. 58 from Eli Whitney, Jr., of New Haven, Conn.” Moller’s research notes that these guns were delivered in the early part of 1861. 1,630 of these guns were subsequently issued to pro-Union Maryland volunteer militia, while the remaining 370 were stolen by rioters on April 19, 1861. It appears likely that those stolen guns ended up in pro-Southern hands. Moller does not estimate the production figures for the guns but infers that some 2,000 to 3,000 were produced. Interestingly, Flayderman’s only estimates the total production of these guns at around 200.

The overall condition is very good. Strong action. The bore is in good shape for its age with good rifling. This example sports a solid stock with an average amount of wear (minor dents and dings). Engravings on the lock have worn. The leather sling is in good shape. Comes with the bayonet as shown.