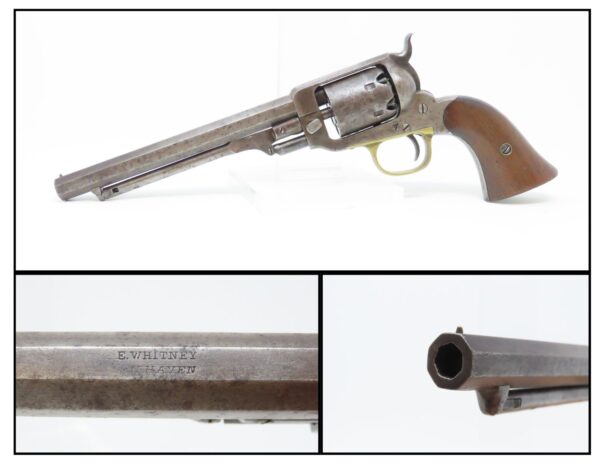 Fourth Most Purchased Handgun in the CIVIL WAR!

Here we present an antique Whitney Navy 2nd Model Percussion Revolver, made circa 1860 in New Haven, Connecticut. Eli Whitney Sr. established his Whitneyville Armory in1798 and produced firearms (among other things) by contract for the young U.S. government. Just prior to this, in 1793, Whitney invented the mechanical cotton gin, which dramatically changed the economic landscape in the U.S., namely in the South. While his invention was a labor-saving device, making the processing of harvested cotton extremely efficient and requiring fewer laborers, his machine caused the market for cotton to explode and more laborers were needed to plant, grow and harvest the crop. This resulted in a corresponding boom in the Southern slave trade. Great fortunes were created, and the population of the South became such that one in three Southerners were slaves. All this provided the fuel that would become the raze that was the American Civil War.

The Whitney Navy Revolver came about when Fordyce Beals—later of Remington-Beal fame—came to work for the company. He was the primary designer, which was indeed why the Remington-Beals Navy and Army Revolvers came to look so much like the Whitney. The Whitney has the distinction of being one of the first successful solid framed revolvers. As their production began before the war in about 1857, both the Union and the Confederacy utilized them in the American Civil War. One very notable character known to have used the Whitney Navy was Confederate Cavalry General J.E.B. Stuart. Many of these were purchased by the US government and by individual soldiers for use in the Civil War.

The overall condition is very good. Original patina. Excellent action. Good bore with nice rifling. Numbers match. The nut for the ramming lever is a replacement. Both grips are in good shape with an average amount of wear. A very nice example of a popular Civil War era sidearm.