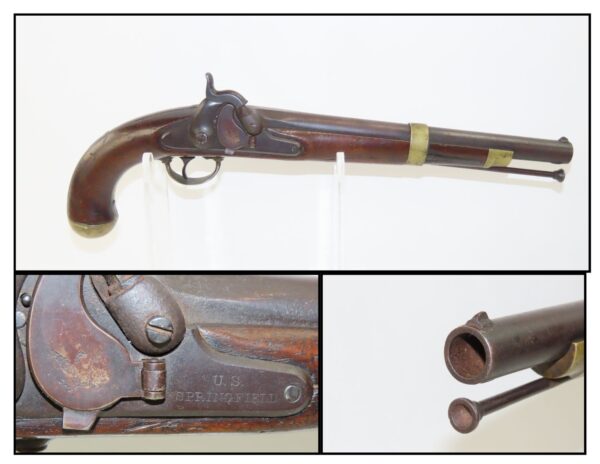 Here we present a very desirable antique Springfield Armory Model 1855 Pistol-Carbine, made in the first production year in 1855, six years prior to the outbreak of the American Civil War. Only 4,021 of these were manufactured, making them very rare, especially considering that many would have been lost during the war. The concept was for all U.S. Army troops to have a common caliber, so that logistics would be simplified, and have a (massive) pistol that cavalry could use while mounted, with an attachable stock for use when on foot but did not prove satisfactory due to their limited rate of fire, poor accuracy, and awkward handling characteristics as pistols. The Maynard tape priming system was also found to be a weak spot and was abandoned by the U.S. military after the Model 1855 series. While these aspects proved to undermine the system and made their production run short, it has made them particularly desirable collector’s items. This model is one of only three handgun models ever manufactured at Springfield, a distinction they share with the venerable Model 1911 and Model 1817 flintlock and were the last single shot pistols manufactured at the national armories. Surviving examples and images from the period indicate they saw use in the Civil War.

The chosen caliber was .58, and it utilized the cutting-edge cone-shaped Minié ball with the hollow base instead of ball. Also relatively new and short-lived was the Maynard tape priming system, to which Springfield had purchased the rights. Instead of directly priming the nipple by hand for each shot, the user would simply install a roll of paper percussion caps, and a single cap would be exposed, sheared and carried by the hammer to detonate on the nipple. Of course, the standard rifle percussion caps could also be used. The ramrod would have been captive on a swivel, so that it was not easily lost in the field, with a hollow tip for pushing the Minié ball.

The overall condition is very good. The action is strong and tight. The bore is in good shape with visible rifling. The stock is solid despite the small, stable crack on the left side. Both the lock and barrel are dated “1855”. The steel parts have matured to a dark brown patina. This is a nice example of one of the most refined single shot cavalry pistols in the US arsenal at the beginning of the American Civil War!