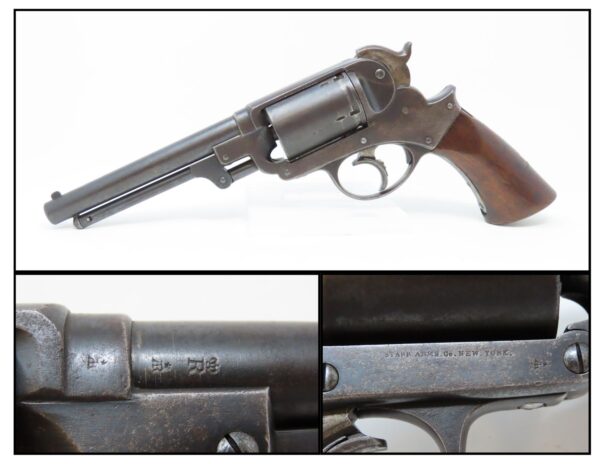 Here we present an antique Belgian Proofed Starr Arms Company Model 1858 Double Action Navy Conversion Revolver, made circa 1861 in New York with a production run between 1858 and 1863. This revolver would have started out life as a .36 caliber percussion revolver and converted circa the 1870s when cartridge revolvers were taking over the market, leaving the percussion revolvers obsolete. Though not nearly as many of these were made as the Colt 1860s or Remington 1858s, the Starr represents probably the third-most issued revolver during the American Civil War. Requiring all manner of firearms during the Civil War, the U.S. government commissioned the Starr Arms Company to produce a Single Action version of its Double Action revolver. Both versions were eventually taken on by the North with at least 47,454 produced in all. This gun would have been used most widely by cavalrymen. It differed tremendously from the other revolvers in its class by being double actioned. The large, curved trigger cocked the hammer and revolved the cylinder, and, at the end of travel, tripped the trigger at the back of the trigger guard, firing the revolver.

The overall condition is good. Bright bore. The grip is in good shape with average wear. The action partially functions (trigger does not drop the hammer). Nicely refinished. The visible markings are legible.