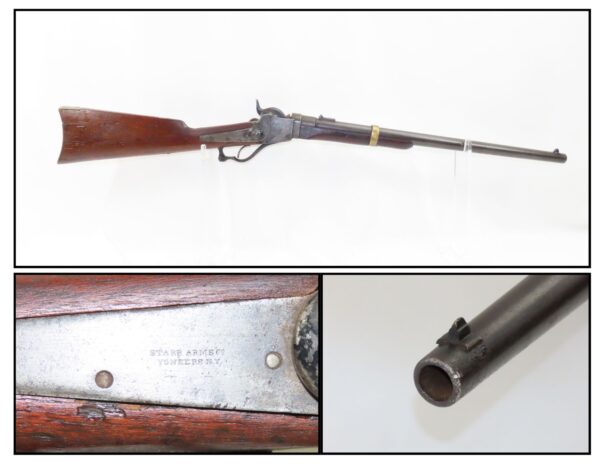 Here we present an antique Starr Arms Co. Saddle Ring Percussion Carbine, made circa 1863 in Yonkers, New York. The Starr carbine was a breechloading single-shot rifle used by the United States Army. Designed in 1858, the Starr was primarily used by cavalry soldiers in the American Civil War. The Starr Arms Co. manufactured 20,601 of these breechloading percussion carbines between 1862 and 1865. Though most Starr carbines were issued to Federal cavalry units during the American Civil War, they were also known to be in the hands of Confederate Soldiers. The style and function certainly reflect the more popular Sharps rifle and carbine. These carbines were known to have been issued, especially in the Western Theater, to the following units: 1st Arkansas, 5th Kansas, 11th Missouri, and 24th New York.

Although the Starr carbine had proven to be effective during the Civil War, it was not successful during the trials of 1865 by the U.S. Army trials board, and no further rifles were ordered. During the war, the Starr Arms Company had been the fifth largest supplier of carbines and the third largest supplier of .44 caliber single action Army pistols. After the war had ended, and with no further government contracts, Starr could no longer compete with larger manufacturers like Winchester, Sharps, and Colt, and the company closed its doors in 1867.

The overall condition is good. This one looks as though it was once Japanned (black lacquer or enamel paint that helps resist corrosion), though almost all of it has worn off. The action is a little hesitant on occasion but functional. The bore is dim with well-defined rifling. Solid stock with expected wear. The nipple is absent, though the threads are intact. A good, used piece for the Civil War collection.