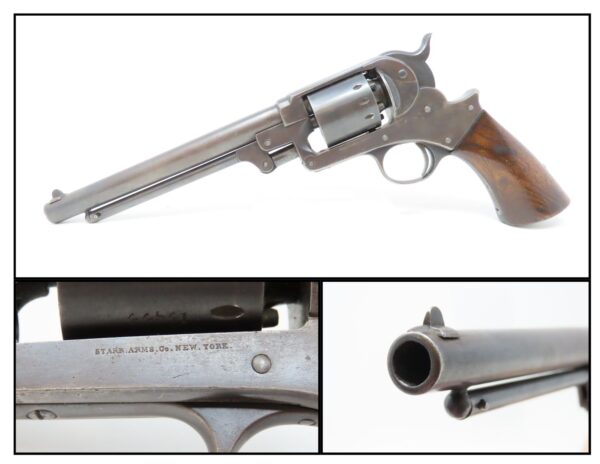 Here we present an antique Starr Arms Co. Single Action Model 1863 Army Revolver, made circa 1863-65 in New York City. Requiring all manners of firearms during the Civil War, the US government commissioned the Starr Arms Company to produce a Single Action version of its Double Action revolver. Both versions were taken on by the North with roughly 47,454 total produced. These saw the most use in the Western Campaign with three sub-variants of the base design, with those being the Double Action Navy of 1858 in .36 caliber, the Double Action Army of 1858 in .44 caliber, and the Single Action Army of 1863 in .44 caliber. Production numbers reached 3,000, 21,454, and 23,000 respectfully. Starr revolvers were one of the top handguns found on Civil War battlefields.

Single letter inspector marks are found all over. This gun was likely sold on the surplus market after the war. Various conversions were performed on old percussion revolvers as a matter of practicality, and taken all over the Unites States, including out West. This one is a true survivor, remaining in its original .44 percussion state.

The overall condition is near fine. Nice blued finish has been reapplied at some point. The action is excellent with a nice lockup! The bore is mostly bright with nice rifling. This example sports a wonderful walnut grip with well-defined grain! Numbers match. Here is a fantastic opportunity to add a very nice Starr Revolver for your collection.