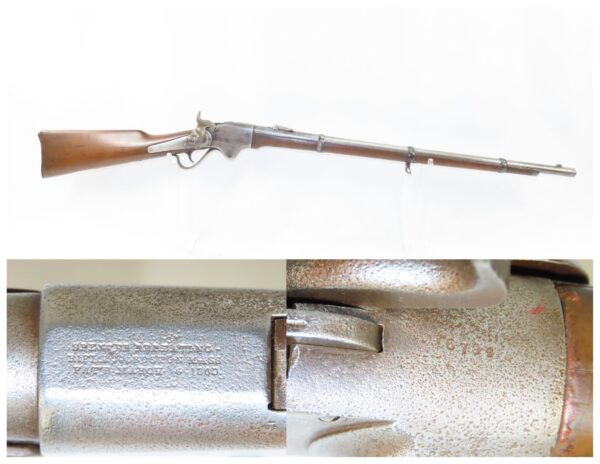 Here we present an antique Spencer Repeating Rifle Co. Army Military Model Rifle, made circa 1863-1865 in Boston, Massachusetts, during the Civil War. These lever-operated, breech-loading rifles were marvels of the time and had a lasting impact on how war was to be fought in the future. Though their service life in the U.S. military was relatively short, the Spencer story includes Christopher Spencer, the inventor of the rifle, demonstrating and shooting with President Abraham Lincoln, who gave his full endorsement of the piece. Supposedly, during the battle at Gettysburg, a captured Rebel that day said one could “load in the morning and fire all day!” This was due to the Spencer’s most endearing quality: a 7-round magazine tube in the butt of the gun. This gave the shooter phenomenal firepower in a day when most soldiers were muzzle-loading single shots or even singly loading their breech-loading carbines. This is truly one of the iconic rifles of the Civil War and Western Frontier.

The Spencer was the world’s first military metallic cartridge repeating rifle, and over 200,000 examples were manufactured in the United States by the Spencer Repeating Rifle Co. and Burnside Rifle Co. between 1860 and 1869. The Spencer repeating rifle was adopted by the Union Army, especially by the cavalry, during the American Civil War but did not replace the standard issue muzzle-loading rifled muskets in use at the time. Among the early users was George Armstrong Custer. The Spencer carbine was a shorter and lighter version designed for the cavalry.

This rifle has had some level of restoration: obviously exposed to heavy weathering and exterior corrosion—now semi-bright with pitting throughout. The stock has likewise been repaired/refinished. The rear sling swivel is absent. Surprisingly, the action remains strong and functional, and the bore is in good shape for age with nice rifling. A survivor!