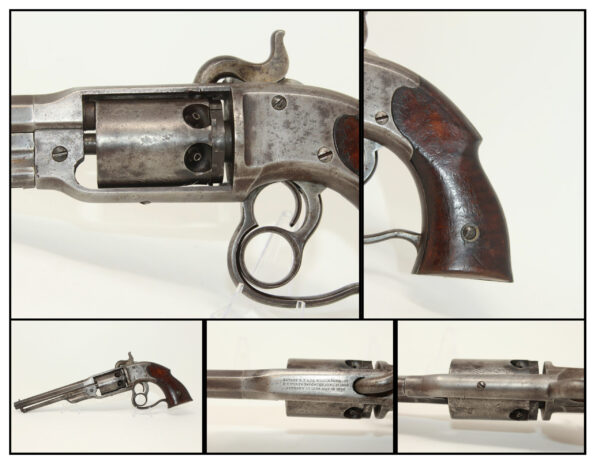 Here we present an antique Savage Navy Revolver, made circa 1862 in Middletown, Connecticut. Only about 20,000 were ever produced, most of them for U.S. government contracts for both the Army and the Navy (ironically, about 800 were purchased and delivered to the Navy, while about 11,000 were delivered to cavalry units in the militias and the Army). The rest of the production was sold commercially and smuggled to the Confederacy when further U.S. government contracts were not forthcoming. Known Southern Cavalry units to have used these were: the 7th, 34th & 35th Virginia, 11th Texas and 7th Missouri Cavalries. Known Northern units were: 5th Kansas, 7th New York, 1st & 2nd Wisconsin.

The most visually distinguishing characteristics of the Savage Navy Revolver are the double ring trigger and trigger guard, as well as the sleek profile with the low bore axis and solid frame. The low bore axis made for less muzzle flip when fired, making follow up shots faster and pointing more natural. The solid frame was an improvement in durability over open top frame designs. Remington and Whitney both featured this improvement, while Colt’s clung to the open top frame (and no wonder, since they were selling them as fast as they could make them during the war). The ring trigger on the bottom causes the hammer to cock and the cylinder assembly to retract in the frame and revolve. By the same token, once the cocking lever was released, the cylinder would go to rest with the end of the chamber against the back of the barrel, making a better gas seal than most. The blade trigger above the ring trigger simply causes the hammer to drop through a hole in the top of the frame. Unlike most other percussion revolvers of the day, the Savage percussion nipples face out from the cylinder and are canted back. This was more easily accessible, and less apt to cause a jam in the action if a cap were to fall off.

The overall condition is very good. Strong traces of original blue finish remain with a gray patina throughout. The markings are clear. The numbers match. The walnut grips are in good shape. The bore is in good shape with nice rifling. The action is not fully functional. The ring trigger cocks the hammer and revolves the cylinder but the hammer slips off the sear.