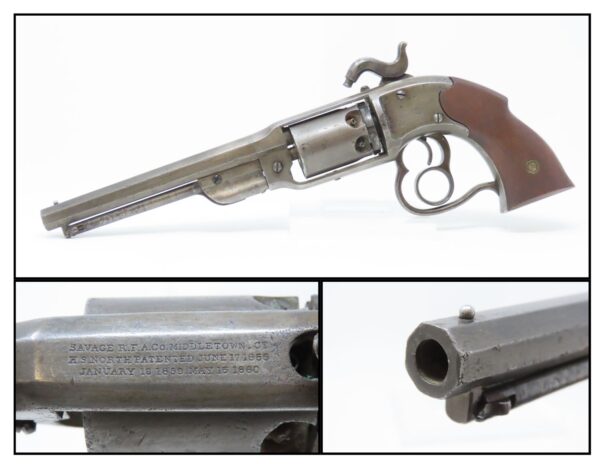 Here we present an antique Savage Navy Revolver, made circa 1862 in Middletown, Connecticut with a production run between 1961 and 1865. Only about 20,000 were ever produced, most of them for the U.S. government contracts for both the Army and the Navy. Ironically, about 800 were purchased and delivered to the Navy, while about 11,000 were delivered to cavalry units in the militias and the Army. The rest of the production was sold commercially and smuggled to the Confederacy when further U.S. government contracts were not forthcoming. Known Confederate Cavalry units to have used these were: the 7th, 34th & 35th Virginia, 11th Texas and 7th Missouri Cavalries. Known Northern units were the 5th Kansas, 7th New York, 1st & 2nd Wisconsin.

The overall condition is good. The action remains strong and functional. The bore is dim with good rifling. A small repair to the right grip toe is stable. Both grips are in otherwise good shape. The screw that retains the loading lever in place broke long ago. These are scarce in any condition, but especially so with the action in functional condition.