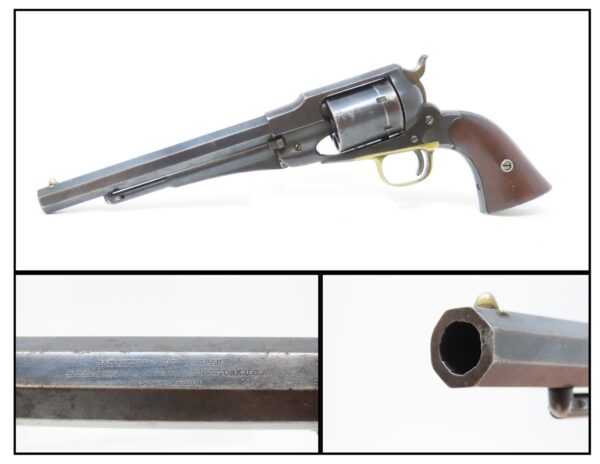 CIVIL WAR Antique REMINGTON New Model ARMY Revolver Converted to .44 COLT Made Circa 1863-65 and Converted in the 1870s!

Here we present an antique U.S. Remington New Model Army Cartridge Conversion Revolver in .44 Colt. The New Model Army was manufactured from 1863 to 1875 with a total production of approximately 132,000 and represented the last of Remington’s .44 caliber percussion revolvers. This revolver was likely converted sometime after the Civil War ended with the expiration of the Rollin-White Patent in 1869. The Remington New Model Army represents the second greatest number of issued handguns found on Civil War battlefields, second only to the Colt 1860 Army.

The New Model Army was the primary revolver issued to Union cavalry after the fire at the Colt’s factory in 1863. The Union government acquired a total of some 122,000 of these New Model revolvers for military use, with nearly 110,000 New Models purchased by the U.S. government during the Civil War, at a cost of around $11 each. The State of New Jersey also purchased several thousand for Civil War issue. The New Model 1863 Army represents Remington’s highest production martial pistol. It featured a strong, solid-frame design with the groove in the top for a rear sight, as opposed to Colt’s open-top design. Though Colt got the lion’s share of the government contracts, many consider the Remington New Model Army the superior firearm. William F. “Buffalo Bill” Cody used an ivory-handled New Model Army .44, serial number 73,293, from 1863 until 1906, when he gave it to his ranch foreman with a handwritten note which said that, “It never failed me”.

The overall condition is near fine. Very nice original blue finish. Robust, tight action. Bright bore with sharp rifling. Both grips are in good shape with and expected amount of wear. The left panel has the remnant of a cartouche. Ordnance inspector markings throughout. A great example of a transitional revolver by Remington!