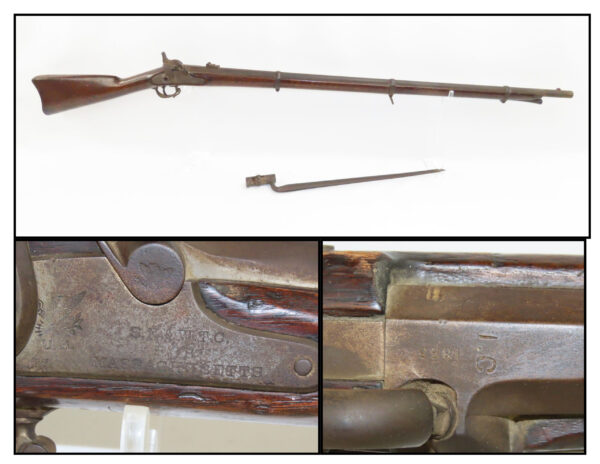 Primary Infantry Weapon of the Union with US Stamped BAYONET!

Here we present an antique S. Norris & W.T. Clement Model 1861 Civil War Rifle-Musket, made circa 1863 in Springfield, Massachusetts. The M1861 was the primary musket at the start of the American Civil War. The musket was designed to fire the .58 caliber minie ball. The M1861 is representative of the “everyman’s” rifle during the war. About 1.5 million rifle-muskets were made in the U.S., over 800,000 of which were made by the Springfield Armory. This was the last hurrah of the rifle-musket as arms development and tactics rapidly advanced during the short period of the American Civil War. Nevertheless, the 1861 represented new technology as it was made for use with the Minié ball, a hollow based, conical projectile that was small enough to quickly push down the muzzle of a rifled barrel and expanded to create a good gas seal unlike a solid, round ball. Almost immediately after the war, the US military switched from the old muzzle loading type weapons to the newer breech loading rifles, bringing an end to the musket as a standard frontline firearm in American history.

The emergency that confronted the nation with the onset of civil war overwhelmed the productive capability of Springfield Armory. The federal armories simply could not manufacture enough weapons to outfit the thousands of soldiers quickly filling the ranks of Union armies. This situation was worsened with the loss of the armory at Harpers Ferry. Outside help was needed, and the government procured the assistance of private manufacturers. Springfield Armory provided technical assistance and supervised the manufacturing and distribution of the Model 1861 muskets so that these contract weapons essentially conformed to the “government model” of the .58 caliber rifle musket. These weapons, as opposed to the numerous pistols and carbines that were purchased on contract, differ basically only in the markings on their lock plates. This particular contract was issued for the State of Massachusetts as a Regulation 1861 contract. Norris & Clement manufactured 11,000 muskets in 1863 and 1864 and incorporated the improvements of the Model 1863 system.

The overall condition is good. The action is strong. The bore is semi-bright and remains in good shape with nice rifling. The cartouche on the left side of the stock is not legible. The stock is solid. Rammer is an old replacement. “US” & “I.C” is stamped on the bayonet. There is a hand carved “X I.C” on the left side of the buttstock. “US” can been seen atop the buttplate tang. “1863 and “I.C” has been stamped on the top of the barrel. The lock reads “1863” with US under the Federal Eagle and “S.N. & W.T.C./FOR/MASSACHUSETTS”. Here is a wonderful Massachusetts Contract rifle to collect and display!