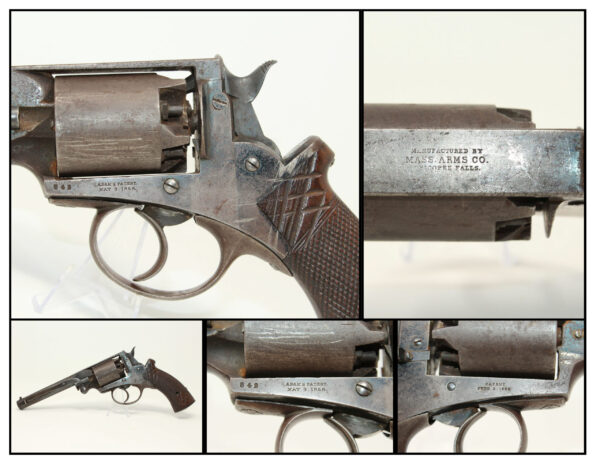 Here we present an antique Massachusetts Arms Co. Adams & Kerr Patent Navy Double Action Revolver, manufactured circa 1861. Only about 1,000 of these were produced, this one being in the 800 range. Brit Robert Adams is credited with patenting the first successful double action revolver in 1851. The Adams revolvers were initially double action only. They were well-received among professionals in the 1850s and served with the British East India Company, with British military officers, and were eventually popular among officers in the South during the American Civil War in the early 1860s, imported from Europe. The US government purchased about 600 of that number when the Civil War began. This revolver was made by Mass. Arms, an American company with patents licensed from Adams and another Brit inventor by the name of Kerr (the rammer).

The overall condition is Near Fine. 30-40% of the original blue remains. The action is strong and smooth. The bore is in very good condition with sharp rifling. All the markings are clear. The grips are in great conditions and feel solid and feature a personal touch of large hand-checkering at the top and bottom. A unique piece that can be shown off in any collection and a great example of transitional technology as well as a piece of Civil War history!