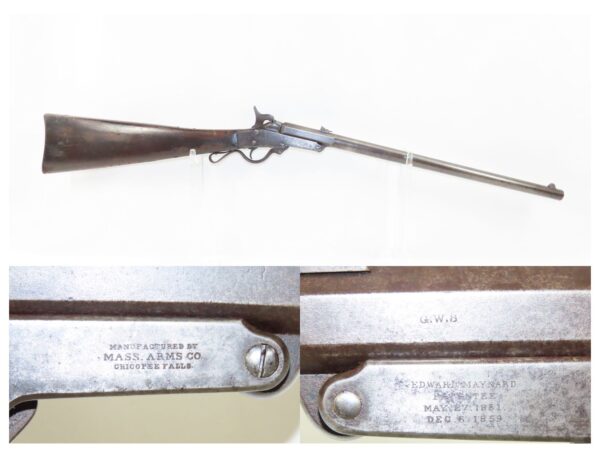 Here we present an antique Maynard Second Model 1863 Cavalry percussion carbine, made by the Massachusetts Arms Co. in Chicopee, Massachusetts, circa 1863. The 2nd Model Maynard carbine is widely regarded as one of the best performing and most accurate of all the cavalry arms used during the Civil War. The well favored, metallic cartridge breech loading carbine was the invention of New Jersey doctor Edward Maynard, who patented his 1st model carbine in 1851. Between 1863 and 1865, the US Ordnance Department contracted for over 20,000 2nd model carbines. Issued mostly to the Federal cavalry, the Maynard proved a lightweight, dependable carbine that saw extensive service in the field.

This example represents a fairly early production of the second model and used by various Union cavalry. Known significant issue and use occurred in the 9th & 11th Indiana, as well as the 11th Tennessee. It was generally well-liked, owing to its light weight, handling and simplicity. The lever simply tips the barrel down so that the breech is exposed for loading and unloading. Compared to a percussion muzzle-loader, it was much faster to put fire down range. The left side of the frame is marked “EDWARD MAYNARD/PATENTEE/MAY 27, 1851/DEC. 6, 1859”. The right side is marked “MANUFACTURED BY/MASS. ARMS CO./CHICOPEE FALLS”.

The overall condition is good. Original finish and patina. The action is excellent. The bore is shiny bright with good rifling. The walnut stock still shows an original inspector cartouche. There is an old repair behind that and it is solid. A good example of one of the most prevalent cavalry carbines of the American Civil War!