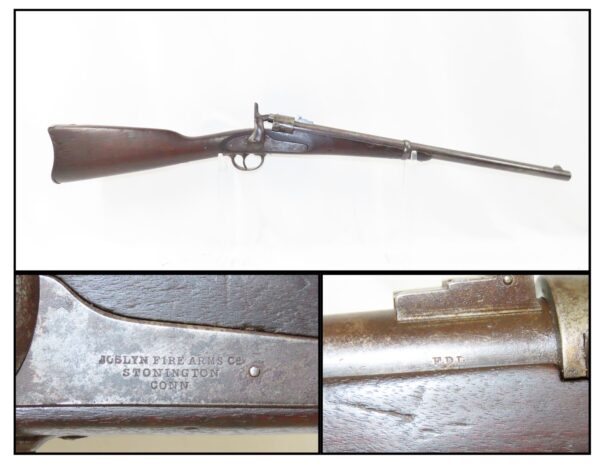 Here we present an antique Joslyn Model 1864 Civil War Cavalry Carbine, made circa 1864 in Stonington, Connecticut. Benjamin Franklin Joslyn was the inventor, holding over 25 firearms patents. 8,000 of these carbines were purchased by the Union during the American Civil War, and they all saw service, being heavily allocated to cavalry regiments such as the 4th and 8th Indiana, 19th New York, 13th Tennessee, 9th Pennsylvania, 3rd West Virginia, 2nd Wisconsin, 1st Nebraska, 1st Nevada and 11th Ohio. As a result of his success with the carbine, the federal government ordered 3,000 of his breech-loading actions in order to build up the U.S. National Armory with breech-loading rifles. These were made for the proprietary cartridge called the 50-60-450 Joslyn Rimfire. These pre-dates the Allin conversion and some of these 3,000 rifles are suspected to have been issued and used just before the end of the American Civil War.

The overall condition is good. Strong action. Nice bore. The walnut stock is solid with an expected amount of wear. “US” is stamped on the butt plate tang. Sharp markings. “FDL” is stamped on the left side of the barrel. A nice example of one of the many different cavalry carbines fielded by the Union during the war!