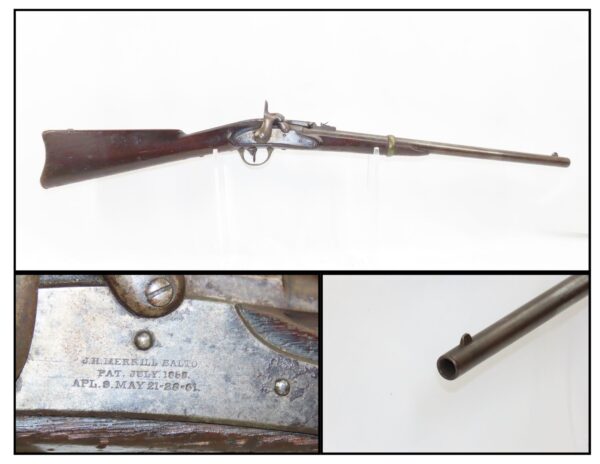 Here we present an antique James Merrill Second Type Percussion Carbine, made circa 1863 in Baltimore, Maryland. The carbines were produced in two versions, which were the First Type and the Second Type. The First Type included a brass patch box in the stock and had the breech lever secured by a flat, knurled latch. The Second Type was produced without the patch box and had the breech lever secured with a rounded, button type latch.

These were made by the company of James H. Merrill in Baltimore, Maryland (a very divided city leading up to the war), with a total production of 14,500. These carbines are known to have been allocated to the following Union cavalry regiments: NY 1st, 5th and 18th; Pennsylvania 11th, 17th, and 18th; NJ 1st; Indiana 7th; Wisconsin 1st and 3rd; Kentucky 27th, and the Delaware 1st. They are also known to have been used by Confederates as they were available before the war or as they would capture them. Confederate ammunition for these were made at the Richmond Laboratory on Brown’s Island in Virginia. It is telling about how many of the carbines the South may have fielded to justify a significant operation making ammunition at the lab.

As an interesting side-note, the Confederate States Richmond Laboratory was the site of the worst home-front disaster in Richmond for the entire war when careless handling of percussion caps caused the several hundred thousand percussion primers, cannon friction primers and 10 lbs. of gun powder to explode, killing at least 44 and seriously injuring 25 more in the small building.

The overall condition is very good. This is virtually untouched. Lovely patina throughout. Strong, tight action. Nice bore with sharp rifling. The walnut stock is solid with expected wear. There is a faint cartouche above the sling ring bar. A very nice, unmolested example of one of the primary Union cavalry carbines of the American Civil War!