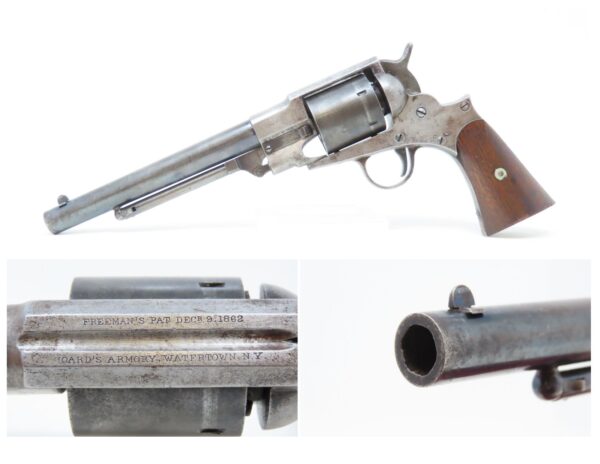 Here we present a scarce antique Hoard’s Armory Army Model Percussion Revolver, made in 1863-64 in Watertown, New York. These rare Austin T. Freeman patent revolvers were manufactured in the closing years of the American Civil War. The design of the revolver looks like a cross between the Remington and Starr revolvers. These revolvers have an interesting method of securing and removing the cylinder, which is a small switch on the right side that when pressed forward allows the cylinder and pin to fall out to the right.

The total production is estimated at only 2,000 revolvers, none which are known to have been purchased by the Federal Government. However, some were likely purchased and issued by state governments, and others undoubtably purchased privately and carried by soldiers heading off to battle.

It is equipped with a small half-moon front sight, frame groove rear sight, “FREEMAN’S PAT DECR 9. 1862” on the right side of the sight groove and “HOARD’S ARMORY, WATERTOWN, N.Y.” on the left side of the groove. The matching serial number “293” is stamped in various locations.

The Freeman Army Model Revolver was a robustly designed and finely finished revolver. Surviving examples of this limited production Civil War revolver are rare in any condition.

The overall condition is very good. Original blue finish/patina. The numbers match throughout including the grips, frame, barrel, cylinder, and loading lever. The action (hammer/trigger) remain strong though the cylinder does not index quite right—coming short of the next chamber & locking up. The unique latch by which to remove the cylinder has been repaired and is stiff. The bore is bright and reflective with sharp rifling. The grips are solid with a little chip at the top front corner on each panel and a chip at the heel on the right panel. This is the only one we’ve ever owned!