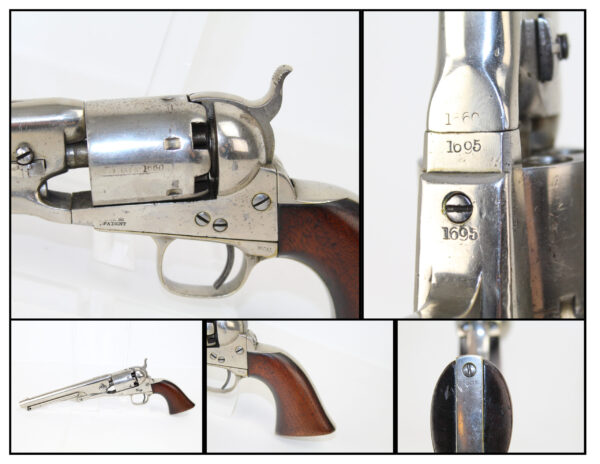 Here we present an antique Colt 1861 Navy Percussion Revolver, made in 1861, during the American Civil War. The introduction of the 1861 Navy was simply an update to the very successful 1851 Navy, with the primary differences being the round barrel instead of octagonal, and the addition of the creeping style of loading lever. These updates made for a sleek package that very much resembled Colt’s crowning achievement, the 1860 Army. The 1861 Navy still retained its .36 caliber, making this the preferred firearm for many not wanting to step up to a .44 like the Army, while still sharing most of its dimensions.

The overall condition is good. This example is of first year production with four digit serial numbers. Numbers on the cylinder, wedge, and barrel match each other, while the frame, trigger guard, cylinder arbor pin, and grip frame match. The numbers are only 35 numbers apart. The barrel wedge screw is an oversized replacement. The end of the loading lever has been repaired. The metal surfaces have been nickel plated. Markings are a bit faint. The walnut grip is smooth and in great shape. The action is excellent, strong and crisp.