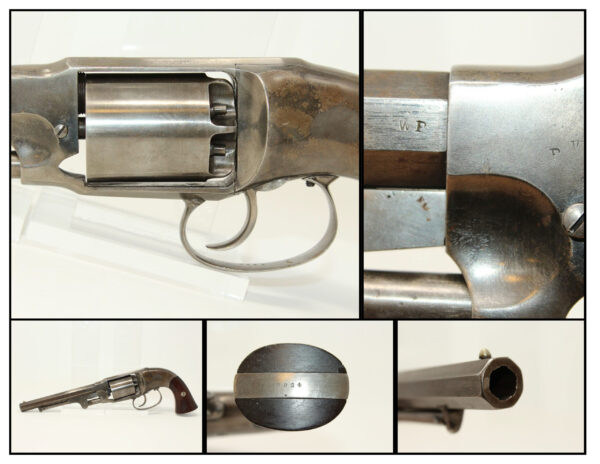 Here we present an antique C.S. Pettengill Double Action Army Revolver, made during the American Civil War, circa 1863, by Rogers, Spencer & Co. in Willow Vale, NY. Only about 3,400 were made in total. The design was a double action hammerless percussion mechanism initially developed by C.S. Pettengill in the 1850s. In 1856, he was granted a patent for it. By 1857, Samuel Colt’s patents regarding the firing mechanism were expiring and Pettengill’s initial design was improved by Edward A. Raymond and Charles Robitaille, for which they received a patent in 1858. The final improvements were made and patented in 1862 by Henry S. Rogers, partner in the firm Rogers, Spencer & Co. It was Rogers and his company which produced the Pettengill Revolver.

The double action trigger accomplished three things: 1) it revolved the cylinder, 2) dropped the hammer and 3) cocked the hammer again for the next shot. The concept of the Pettengill revolver was well-received, especially as a cavalry weapon, and an order was made of 5,000 by the U.S. Ordnance Department. However, the pistol was trialed in June 1862 and it failed. The bugs were worked out, but the government cut their contract down to only 2,000 pieces. The contract was fulfilled at the end of 1862.

Per Flayderman, “The 3rd Michigan Cavalry were issued 500 of them. Other mounted outfits issued lesser amounts were the 3rd and 5th Missouri Militia; 1st Arkansas; 3rd Illinois; 3rd Kentucky.” Unfortunately, this was the end of production for the Pettengill. Rogers, Spencer & Co. would go on to purchase the patent for a single action revolver from Austin T. Freeman, quite similar to the Remington Army, and sell 5,000 of them to the government in 1865. It is no coincidence that the front half of the Pettengill and the Rogers, Spencer & Co. look so similar. They are actually identical. Never issued, what some collectors deem the best revolver of the Civil War sat in storage in New York until being purchased by Bannerman & Sons and sold as surplus in 1901.

This is a very large, dragoon-sized pistol with a very smooth double action trigger. It shows government inspection marks on the major components.

The overall condition is very good. The iron parts are smooth and gray. The markings are clear. The grips are in fine shape. The bore is in very good shape with sharp rifling. The action remains strong. The cylinder indexing hangs up on one chamber, but is otherwise in good order. Here is a really neat, scarce double action, dragoon-sized revolver from the American Civil War!