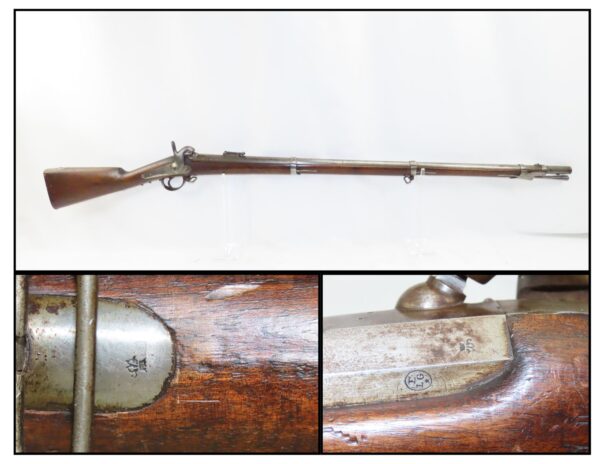 Here we present an antique Belgian Model 1842 Percussion Musket, manufactured circa the late 1850s to early 1860s in Liege, Belgium. This is a nice example of one of the tens of thousands of European muskets and rifles imported to arm early volunteers in the American Civil War. This piece was manufactured in Liege, whose gun makers produced copies of regulation arms for a number of European countries in addition to both sides in the Civil War.

There were many muskets purchased by the Union agent Hartley in Liege. This weapon was imported in large quantities and was issued. There is no record of any Southern contracts and Confederate usage would have been limited to capture or battlefield pick-ups.

This gun follows the basic lines of the French infantry Musket of 1842. It is iron mounted with three barrel bands with the upper band being a double. It is equipped with a bayonet stud mounted under the muzzle and fitted with a folding long range rear sight. As is characteristic of many French and Belgian arms, it is fitted with a back action lock with a lock plate secured at the rear by a screw requiring a special screwdriver to discourage “meddling” by curious privates.

Imported arms played a key role in the early years of the war before the U.S. armories and contractors could catch up in production. Some estimates of imported French and Belgian arms place their numbers close to 150,000 examples.