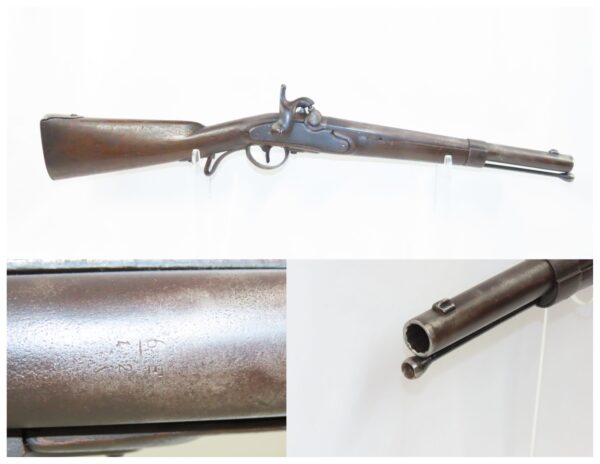 Here we present an antique Austrian Musket Carbine, made circa 1851 and converted to percussion circa 1861. Many of these Austrian muskets were sold to both the Union and Confederacy during the American Civil War as both belligerents were desperate for small arms for their forces. These carbines were originally produced in Austria with the Augustin Consol Lock ignition system, better know to collectors as the “tube lock” or “pill lock” system. These carbines had short 14-1/2” barrel that were manufactured with a beech stock that included a typical Austrian raised cheek rest and an iron skeletonized pistol grip to the rear of the trigger guard.

When the Civil War began, arms purchasers and speculators scoured Europe and England for small arms available for purchase. These obsolete carbines were quickly offered for sale by the Austrian government. The United States government purchased at least 10,000 of these carbines, with that number obtained by the U.S. by the purchasing agent George Schuyler. These guns are well documented as being issued to General Fremont’s western forces in early 1862. More recent research also provides evidence that the Confederacy also purchased some of these carbines, and there are a handful of identifiable Confederate examples are in existence. It appears that the majority of the carbines were altered to percussion prior to their importation to the U.S., most likely in Belgium, with some possibly altered in Austria or one of the Germanic states.

The overall condition is good. Patina throughout. The action is excellent. The bore is in good shape with strong rifling. The stock shows much wear and has some stable splits—overall solid. The ramrod is a replacement.