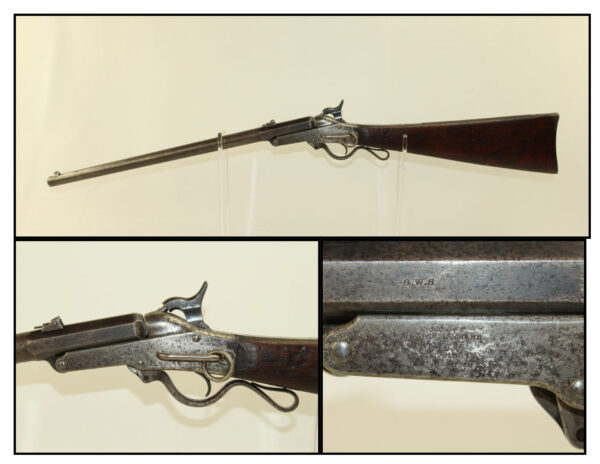 This example represents a fairly early production of the second model and used by various Union cavalry. Known significant issue and use occurred in the 9th & 11th Indiana, as well as the 11th Tennessee. It was generally well-liked, owing to its light weight, handling and simplicity. The lever simply tips the barrel down so that the breech is exposed for loading and unloading. Compared to a percussion muzzle-loader, it was much faster to put fire down range. The left side of the frame is marked “EDWARD MAYNARD/PATENTEE/MAY 27, 1851/DEC. 6, 1859”. The right side is marked “MANUFACTURED BY/MASS. ARMS CO./CHICOPEE FALLS”. The Ordnance sub-inspection mark “G.W.S.” is stamped on the left side of the barrel. The left side of the stock wrist is stamped with two good cartouches.

The overall condition is very good. 10% of the blue finish remains with a gray patina throughout. The markings are clear. The walnut stock is in good shape, showing the kind of wear that is expected from a 150+ year old cavalry carbine. The bore is bright with good rifling. The action is excellent, strong and crisp.