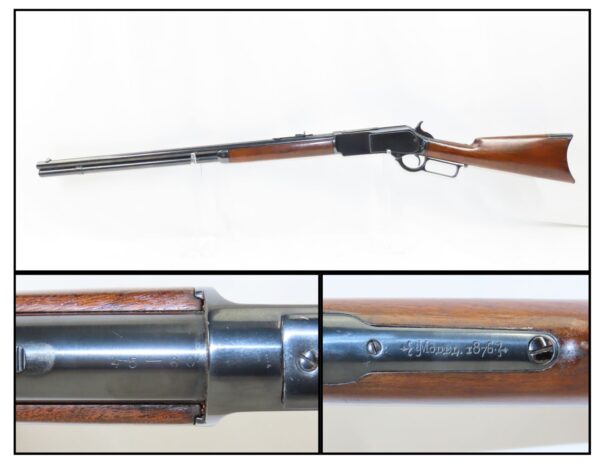 Classic Lever Action Rifle Made in 1884

Here we present an antique Winchester 1876 Lever Action Rifle chambered in .45-60 WCF, made in 1884 in New Haven, Connecticut. With the arrival of many powerful centerfire cartridges appearing on the firearms market, is was no surprise that Winchester would develop a new rifle based on the proven Winchester function. Up to this point, Winchester was focused on guns competing to fire the established centerfire and rimfire cartridges. The Winchester Model 1876, also known as the “Centennial Model” due to it appearing in time for America’s 100-year birthday celebration, became their “full-power” answer in the firearms market, with only 63,872 total being made beginning in 1876 and continuing through1898. The main difference between the Model 1876 over preceding Winchester designs was its enlarged receiver specifically designed to handle the larger, full-power cartridges. The tube magazine could hold up to 15 rounds, depending on the cartridge the rifle was chambered in. The barrel lengths varied between 23 and 36 inches, with all lengths between available. The first production models were chambered in 45-75 WCF, and other chamberings followed firing the .40-60, 45-60 (as is this one), and the .50-95 Winchester Express.

Overall, the Model 1876 more than proved its worth as a Winchester lever action repeater. It was a powerful firearm with great stopping power and reliability second to none. Some of the famous names to use the Model 1876 included the Texas Rangers, the Canadian Mounted Police, the Apache war chief Geronimo, and former US President Teddy Roosevelt. Roosevelt’s first Winchester was a Model 1876 which he ordered when he was 22 years old.

This one was originally made in .40-60 WCF (as the lifter still notes), however, it has been rebarreled for .45-60 WCF. The original barrel will come with the rifle.

The overall condition is fine. The entirety has been nicely refinished. The barrel has been swapped as noted above and the original will be included. Bore is bright with sharp rifling. Robust, strong action. Solid stock throughout in fine shape. A very nice example of the scarce and desirable big boy Winchester!