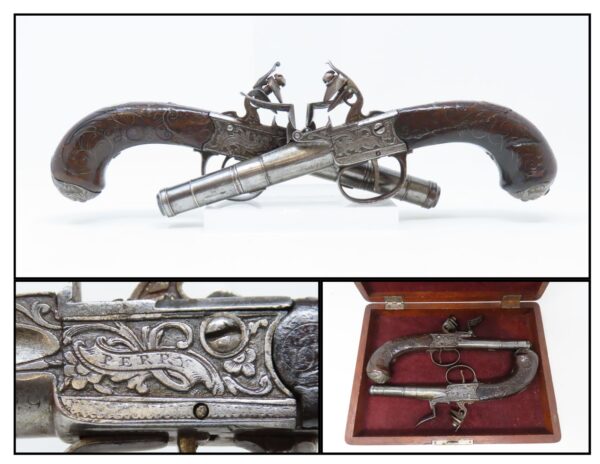 Here we present an antique engraved pair of Cannon Barrel Flintlock Pistols by Perry of London, made circa late-1700s in Birmingham, England. William and Richard Perry were British gunmakers circa the 1760s into the late 1700s. These pistols feature silver wire inlay in the stocks as well as cast silver pommel caps with so-called “grotesque” faces.

These pistols were designed to be ideal as “Overcoat” pistols, easily fitting in the large side pockets that were fashionable in both Military and Civilian Overcoats of the Napoleonic era of 1790 through 1815. In the cities, carrying concealed weapons became essential to combat ruffians and criminals that cruised the streets looking for victims to take advantage of.

The overall condition is very good. The action is strong and tight on both pistols. The bores are in good shape. Most of the wire inlays are intact and seated deeply.  These were later serial numbered “S729” & “S730”. Pre-1813 English proofs on the underside of both barrels. The stock on the first pistol has been repaired and you can see the crack at the end of the bottom tang as well. The case is in nice shape and displays well.