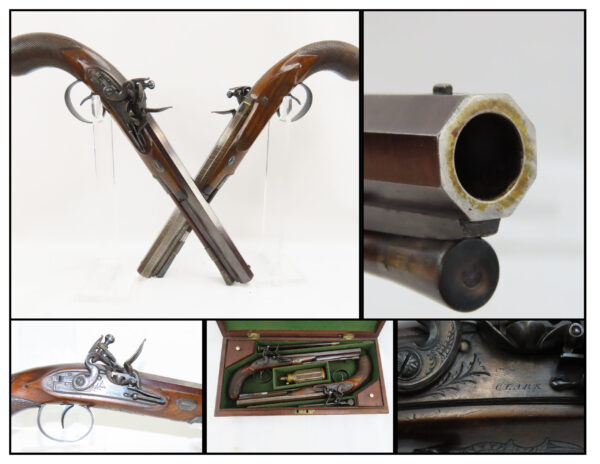 Here we present a Cased Pair of Antique English Flintlock Pistols by Clark, made circa 1820 in England and marked “EXETER=CHANGE=LONDON”. These pistols were sold by businessman Thomas Clark in his T. Clark’s General Outfitting Warehouse for the East and West Indies, and South America, which was in the Exeter ‘Change (or The Exchange) on the Strand in London. The Exeter Change was a building built on the north side of the Strand in 1676 over Exeter House. It was a center for commerce as well as entertainment. Thomas Clark has been described as eccentric by some. He certainly seems the showman. He owned much of the retail space in the ‘Change and in the upper rooms there he established (c.1773) a sort of menagerie of exotic animals, from lions and tigers to monkeys. He sold that in 1793 but continued with his retail business in the Exchange. In an 1826 advertisement we found, he boasts that “OFFICERS, CADETS, and WRITERS going to India, and Gentlemen proceeding to any part of the Globe, will find every possible Requisite in this Establishment, with the whole of those Military Appointments, Swords, Chacos, Belts, Pistols, Sashes, &c.”

These are beautiful flintlock pistols that anyone would be proud to own. They feature hand-checkered half-stocks with 9 ½ inch octagonal, Damascus barrels in .55 caliber. Bores are smooth. The locks are neatly engraved and case colored, and feature sliding bar safeties. The vents are lined with platinum. Banded, case colored breeches. The trigger guard is also engraved and blued. Each stock has a small initial placard of silver above the grip. The locks are marked “CLARK” and the barrels are marked “EXETER=CHANGE=LONDON”. The fitted case is lined with green felt and contains .53 caliber balls and mold (the bore diameter measures .55 but would take these patched .53 caliber balls very nicely), a powder flask, and additional ramrod (each one of the pistols already has one).

The case contains many accessories, including a powder flask, loading rod, and bullet mold.

The overall condition is fine. The action is excellent on both pistols. The bores are in great shape. Both pistols have been professionally restored and showcase the case colors on the locks and Damascene pattern on the barrels. The stocks are solid, and the checkering remains sharp. A magnificent set from the “ExChange” on the Strand in Victorian London!