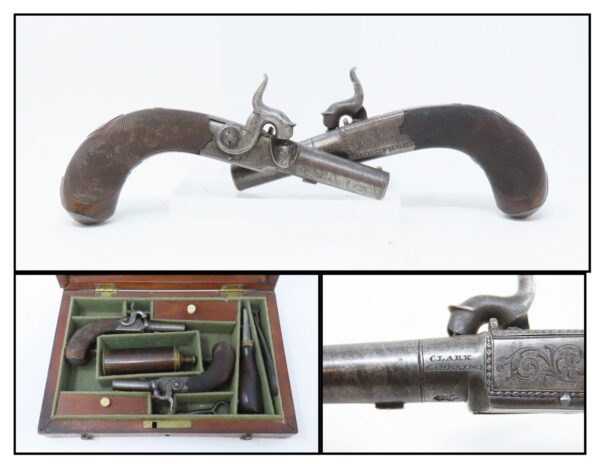 Here we present an antique pair of Engraved Clark of Cambridge Pistols, made circa 1840-50 in Cambridge, England. These self-defense pistols would have been most at home in the pocket of anyone in the busy city of London during the eventful 19th Century. These pistols are nicely adorned with floral engraving and nicely checkered stocks.

Men would carry them concealed in a waistcoat pocket and women would hide them in a hand muff. These were, of course, made primarily for self-defense, and very well would tell stories if they could. Much happened in Britain, in its colonies and abroad during this period. Their very short barrels and small bores would have been very easy to conceal that would have been quite the shock for the ne’er do wells roaming the big city streets. These were likely owned by someone rather affluent, having a matched cased pair with their initials engraved on the backstrap.

The overall condition is very good. The action on both pistols is strong and tight all around. The stocks are seated firmly against the frame and the checkering remains sharp! Both bores are in good shape. Both pistols are inscribed with the initials, “J.B.” in script.  The traditional floral engravings on the frame and hammer remain well defined and clear. “CLARK/CAMBRIDGE” is engraved on the left sides of the frames. Each bears London proofs. The hammer of the first pistol is cracked but stable. This example includes a fitted case, powder flask, ball mold, screwdriver, and barrel wrench. A great set from Cambridge!