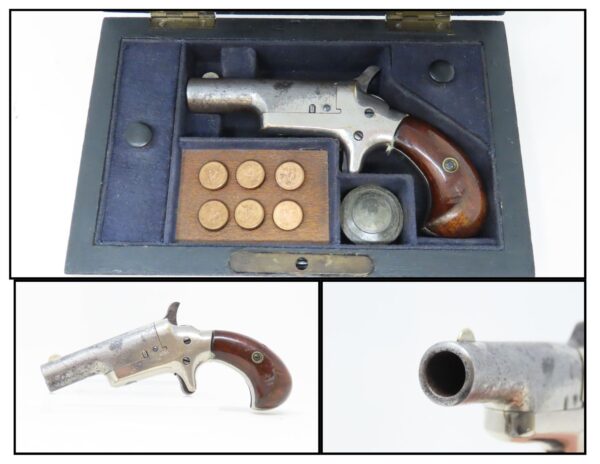 Here we present an early production antique Colt Third Model Thuer Deringer, also known as the New Model Deringer, made between 1875 and 1912. This one comes in a period fitted case. During this span, Colt manufactured 45,000 of these deringers. The serial number series ran from 1 to 45,000, though the yearly production numbers are not known. In 1870 Colt’s purchased National Arms Company and began producing a Deringer pistol based on its design. This became Colt’s First Model Deringer and it was Colt’s first single shot pistol. It was followed in quick succession by a very similar pistol, called Colt’s Second Model Deringer. Both of these pistols were chambered for .41 rimfire and featured a barrel that rotated counter-clockwise for loading and unloading. In the same year, a Colt employee, F. Alexander Thuer, patented an altogether different design.

This one comes in a fitted period case that includes an oiler, key, and two-piece cleaning rod of appropriate size. The .41 rimfire cartridges are for display purposes only and will not accompany this set. The bottom of the case has an old (circa 1920s) collector label that attributes the set to 19th Century dealer Joseph C. Grubb & Co. of Philadelphia, Pennsylvania.

The overall condition is Very Good. Original nickel finish. The action is strong. The bore is in good shape remaining semi-bright with thin rifling. Both grips are solid with some shine left on the finish. The period case is in near fine condition. A wonderful set!