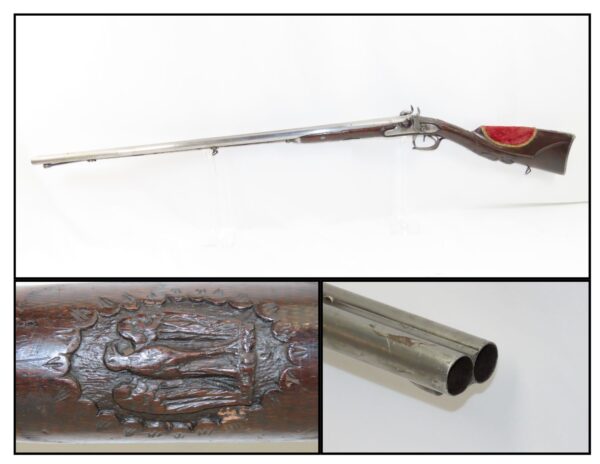 Here we present an antique Nicolas Noel Boutet Double Barrel Percussion Conversion Side by Side 16 Gauge Shotgun, made sometime in the early 19th Century at the manufactory in Versailles, France. French royal and imperial gunmaker Nicolas-Noël Boutet (1761-1833) was and remains one of the most renown European gunmakers of the late 18th century and early 19th century. He was a French gunsmith and bladesmith who was director of the Versailles state arms factory. More than 600,000 weapons were produced under his directorship. He was given the title of “Gunmaker-in-ordinary” to King Louis XVI of France. During the French Revolution, we worked for Napoleon as the director of the state arms manufactory. He died in Paris in 1833.

The locks are signed “Boutet” on the right and “a Versailles” on the left in gold flanked by foliate motifs. The locks and furniture are engraved with a variety of designs with floral accents. There is an Imperial French eagle carved into the bottom of the forestock as well as a fantasized ruminant’s head that flows from the bottom of the pistol grip. The steel parts are all engraved and include a rabbit on the butt plate tang with a border along the sides, quaint floral designs on the locks, hammers, and trigger guard. The finial of the trigger guard bears a swan, the figure associated with Empress Josephine and the Chateau de Malmaison, her home during this period. Most noticeable about this piece is the red velvet cushion on the comb.

This handsome double barrel fowler was originally made in the flintlock firing system though later updated to percussion. The conversion was neatly done with bolsters installed atop the remnants of the flashpans and hammers with large heads. The stock is a thing of beauty, both for the grain of the wood as well as the craftsmanship involved. The comb has a low rise with a well-positioned cheek rest. Curvaceous is the word to describe this piece and everything flows together nicely.

The overall condition is very good. Strong action. Smooth bores that could be cleaned. The nipples are original and a bit fouled. Solid stock. A beautiful shotgun from the French Empire of Napoleon.