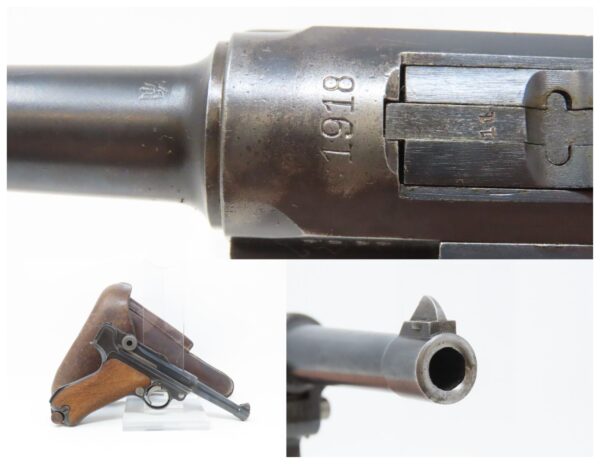 Here we present a C&R World War I Era DWM Semi-Automatic P.08 German Luger Pistol, made circa 1918 by DWM (Deutsche Waffen-und Munitionsfabriken) in Berlin, Germany. Basing his design off Hugo Borchardt’s seminal C93, Georg Luger successfully brought Borchardt’s work to practical fruition. While finding buyers for the C93 seemed an exercise in futility, the new Luger Pistol found many countries eager to test it and even adopt it. There are many variations in this field of collecting, but relatively few major changes in overall design from beginning to end. The P.08 is the pistol carried by German troops during World War I and II and is perhaps the most associated with those events. It is one of the most iconic pistols in history.

This interesting example features a 1918 dated chamber along with a 1918 dated Burghard leather holster. The holster is scribed with “W. Young/102007/75.Battalion/Sept. 2/18”, “Dury Ridge”, and “Drocourt-Queant”. Walter Joseph Young (b. 9 January 1898) was a young chauffer in Niagara Falls, New York before the war. He was indeed in the Canadian 75th Infantry Battalion and he was present at the attack on the Drocourt-Queant Line in September of 1918.  Sadly, he died of wounds shortly after the war on December 23, 1918, and was buried at St. Sever Cemetery, Seine-Maritime, France (per the Canadian Great War Project).

The 75th Battalion was an infantry battalion of the Canadian Expeditionary Force during the Great War. The 75th Battalion was authorized on July 10, 1915 and embarked for Great Britain on March 29, 1916. It disembarked in France on August 12,1916, where it fought as part of the 11th Infantry Brigade, 4th Canadian Division in France and Flanders until the end of the war. The battalion was disbanded on September 15,1920. For the Canadian Corps’ actions during the Second Battle of Arras, including the Battle of the Scarpe and the breakthrough of the Drocourt-Queant Line, the Dury Memorial was established to commemorate the actions of the 75th just south of the town of Dury, Pas-de-Calais, France.

The overall condition is fine. Very nice blue finish and straw colors. The markings are clear. The numbers match throughout, with the exception of the magazine base. The action is excellent. The bore is bright with sharp rifling. A very nice pistol with some provenance!