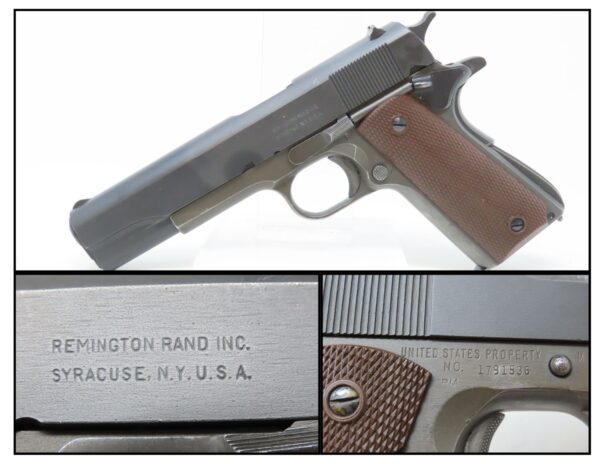 Here we present a C&R Remington-Rand Model of 1911A1 U.S. Army Pistol, made in 1944 in Syracuse, New York. John Moses Browning’s famous pistol was adopted by the U.S. government in 1911 and attained iconic status throughout both World Wars, Korea, Vietnam and beyond. This one was made in the middle of World War II. The Model 1911 series of pistols is one of the most successful small arms designs of the 20th century, and in all of modern warfare history, for that matter. The handgun has been produced in quantity in the United States, Argentina, and Norway (the latter two under license production as the M1914 and the M1927 respectively) and was fielded in both World Wars and many of the major and minor conflicts of the century, eventually becoming a commercial success. The Model 1911 continues service in many forms today and is still a favorite among sporting, security, and casual gun lovers all over the world.

From the mid-1920s to the mid-1950s thousands of 1911s and 1911A1s were refurbished at U.S. Arsenals and Service depots. These refurbishes could be minor inspections to major overhauls. Pistols that were refurbished at Government arsenals will usually be marked on the frame with the arsenal’s initials. This example is marked “RIA”, for Rock Island Arsenal just under the “UNITED STATES PROPERTY” marking and serial number.

The overall condition is near fine. Refurbished with nearly complete finish. The action is excellent. The bore is bright with sharp rifling. The grips are in very nice condition.