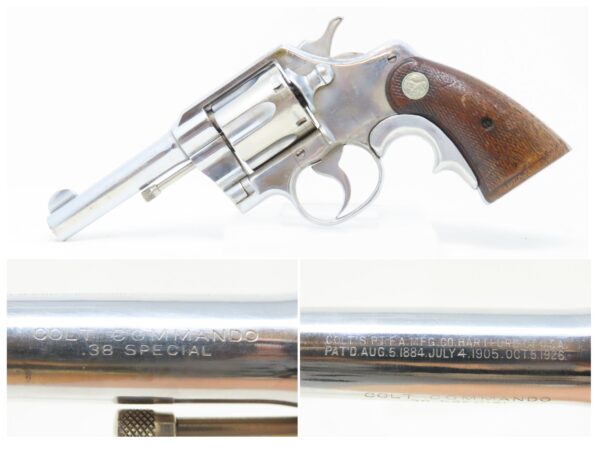 Here we present a C&R Colt “Commando” Revolver in .38 Special, made in 1942 by the Colt Manufacturing Company in Hartford, Connecticut. The Commando was a wartime variant of the Official Police. Approximately 49,000 Colt Commandos were purchased by the U.S. government during World War II. Based on factory results, the U.S. Army directly procured more than 16,000 Commandos, while only about 1,800 went to the U.S. Navy in the early war years. The remainder of the manufactured Commandos was purchased through Army Ordnance contracts. A total of 12,800 Commandos were issued to U.S. Military Intelligence, the Counterintelligence Corps, the newly formed Office of Strategic Services (OSS), and other intelligence organizations.

The Colt Commando was produced during wartime for the sake of both manufacturing expediency and cost reduction in a booming rearmament economy. The revolver fulfilled its role in arming a broad swath of military and nonmilitary personnel. Today, the appearance of a Colt Commando generates curiosity among those interested in both the lesser known weapons of World War II and the nuanced history of revolver firearms production.

The overall condition is very good. This one wears an old nickel finish. The action is excellent. The bore is bright with sharp rifling. The Colt medallion grips are checkered and worn nearly smooth from use. This one has an added finger grip addition to the front strap. The name “Ray Hoffman” and the number “7744” is electropenciled on the right side. This is a very neat revolver that feels like it has a story.