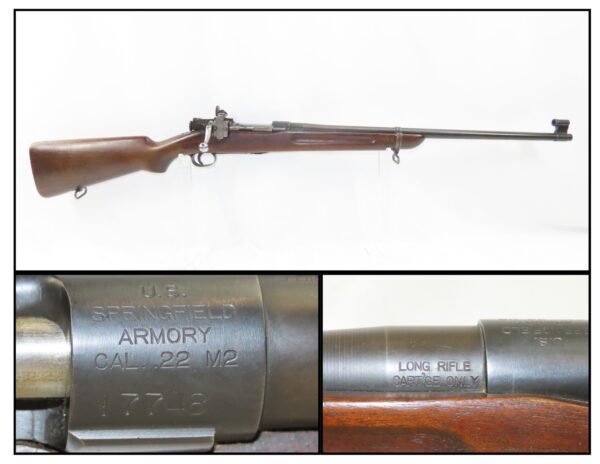 Here we present a C&R U.S. Springfield M2 Model 1922 Bolt Action Practice Rifle, made in 1942 at the Springfield Arsenal. In 1919, under the direction of Maj. Julian S. Hatcher, with the cooperation of the National Rifle Association, work was started on a .22 caliber bolt action practice rifle. The goal was to provide an accurate smallbore rifle for school competitions, civilian rifle clubs and sale to NRA members. The rifle was to be built on a modified 1903 Springfield action. After modifications and testing, the U.S. Army decided to adopt the rifle, and after that it was made in two versions, one for Army issue and the other for civilian sales. The rifle continued through several test models, with the final design standardized in 1922. It was called the Model of 1922, Cal .22. In 1932, a final set of improvements was made to the Springfield .22. This modified rifle was designated the M2. Receivers were marked “U.S. Springfield Armory, Cal .22, M2.”

This rifle had a production run from 1922 through 1942. It features a 24-inch barrel and a 5-round magazine. It was built as a cadet rifle, designed to mimic the M1903 Springfield rifle for training purposes. It was produced in four different versions including the Model 1922, the M1922M1, the M1922M1 NRA, and the M2, until just after the start of World War II, when shortages of materials made production of a training rifle impractical. This M2 variant was introduced in 1933. This version featured a simplified bolt and a shallower pistol grip on the stock. “M1922” was not included in the M2’s designation.

The overall condition is near fine. Strong action. The bore is bright. Solid stock with less than expected wear. The markings are sharp. A great piece of American military hardware!