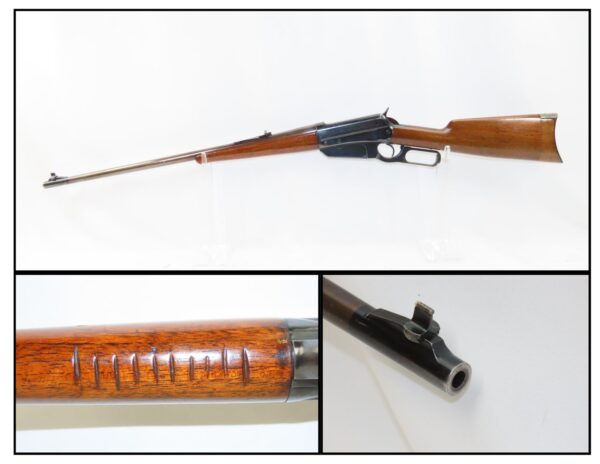 Here we present a C&R Winchester Model 1895 lever action repeating rifle manufactured in 1922 in New Haven, Connecticut, and chambered in .30 US, also known as the .30-40 Krag. The Model 1895 was the first Winchester rifle to feature a box magazine located underneath the action instead of the tubular magazine design, which had remained fundamentally unchanged from the Winchester 1866. This allowed the rifle to safely chamber military and hunting cartridges with pointed bullets. The M1895 was also the last of the lever-action rifles to be designed by John Moses Browning and featured a rear locking bolt as in his previous designs dating back to the Winchester 1886. The M1895 was the strongest lever-action rifle Winchester had produced, designed to handle the increased pressures generated by the more powerful smokeless powder cartridges entering common use at the time of its introduction.

The overall condition is very good. Refinished metal surfaces. The left side of the receiver is drilled and tapped for the Climbin’ Lyman receiver peep sight. There are 10 notches cut into the bottom of the forearm. Excellent, smooth action. Bright, well-rifled bore. This example sports a solid walnut stock. The rear of the stock has been added on to and length of pull is 13 1/8 inches. There is a sleeve portion of the exterior of the barrel at the muzzle that is simply to fit the new front sight.