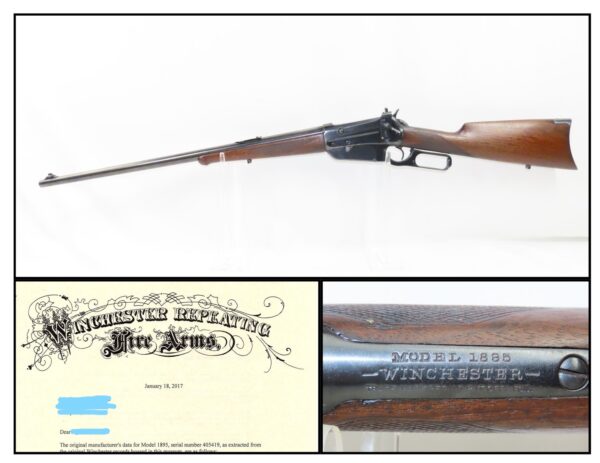 Here we present a C&R Winchester Model 1895 lever action repeating rifle manufactured in 1920 in New Haven, Connecticut, and chambered in .30-03. The Model 1895 was the first Winchester rifle to feature a box magazine located underneath the action instead of the tubular magazine design, which had remained fundamentally unchanged from the Winchester 1866. This allowed the rifle to safely chamber military and hunting cartridges with pointed bullets. The M1895 was also the last of the lever-action rifles to be designed by John Moses Browning and featured a rear locking bolt as in his previous designs dating back to the Winchester 1886. The M1895 was the strongest lever-action rifle Winchester had produced, designed to handle the increased pressures generated by the more powerful smokeless powder cartridges entering common use at the time of its introduction.

The .30-03 was a cartridge developed by the United States in 1903 to replace the .30-40 Krag in the new Springfield 1903 rifle. The .30-03 was also called the .30-45 since it used a 45 grain powder charge. The name was changed to .30-03 to indicate the year of adoption. It used a 220-grain round-nose bullet. Though production of the .30-03 caliber continued for over thirty years, the .30-06 chambering was introduced only three years later in 1906 firing a spitzer bullet giving better ballistic performance.

The overall condition is very good. This piece has been nicely re-blued. Strong, tight action. The bore is bright. This example sports a solid walnut stock with minimal wear. Checkering on the buttstock and forearm remains sharp. Marble front sight and barrel-mounted rear sight with a “climbin” Lyman on the receiver.