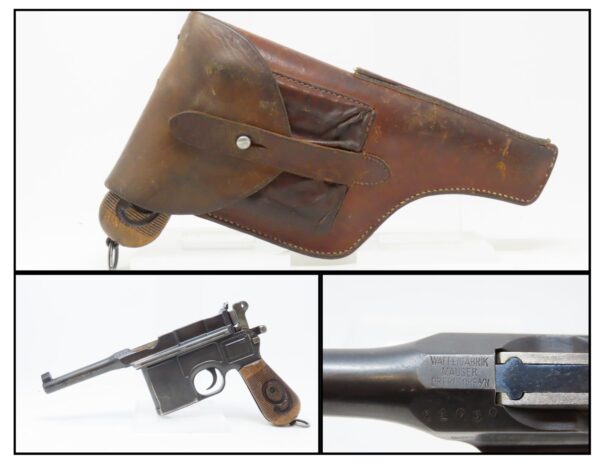 With “RED 9” GRIPS and LEATHER HOLSTER!

Here we present a German Imperial Army Mauser Broomhandle Pistol, made circa 1917 with a production run between 1896 and 1937. This is the classic “Broomhandle” that was produced in 9mm in the middle of the Great War. During the war, the Imperial German Army contracted with Mauser for 150,000 pistols chambered in 9mm Parabellum to offset the slow production of the standard issue Luger P08 pistol. This variant of the C96 was named the “Red 9” after a large number “9” was burned and painted in red into the grips, to warn the pistol’s users not to load them with 7.63mm ammunition by mistake. Of the 150,000 pistols ordered, approximately 135,000 were delivered.

The Mauser Broomhandle was one of the Mauser Company’s most successful pistol and was even used by the likes of Winston Churchill during the Boer Wars. He is attributed as saying that it was “the best thing in the world”.

The grip earned the gun the nickname “broomhandle” in the English-speaking world, because of its round wooden handle, and in China this pistol was nicknamed the “box cannon” because of its rectangular internal magazine.

This overall condition is very good. Excellent action. Bright bore. Both grips are in very good shape. Numbers match including the grips. The leather holster is in good shape. A very nice example of the Red 9 Mauser!