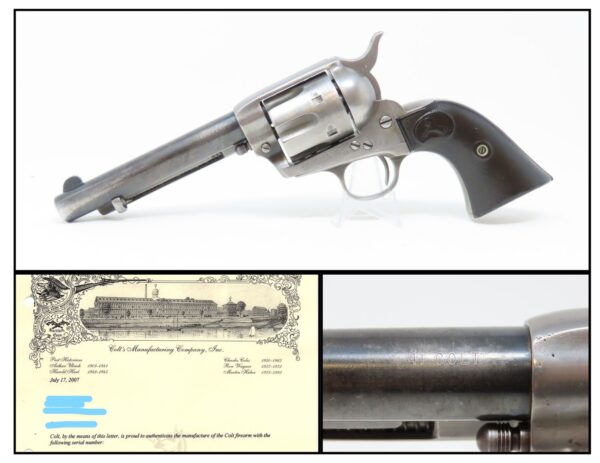 Here we present a Lettered C&R Colt Single Action Army Revolver, manufactured in 1912 in Hartford, Connecticut and shipped, along with 9 others, to the A. Baldwin & Company of New Orleans, Louisiana. This was a hardware store that sold tools, firearms, and home goods.

The Colt “Peacemaker” was introduced in 1873 and has become one of the most iconic firearms in all of history, thanks to its widespread use by the U.S. military, civilians and, more recently, in Western films. Total production numbers for the Colt Single Action Army reached 357,859. The production numbers for the .41 caliber reached only 19,676, making this model one of the scarcer models out there.

The overall condition is very good. Excellent, crisp action. The barrel was re-marked at some point and still bears a good amount of blue refinish. Good bore with nice rifling. The rampant Colt trademarked grips are in good shape. Numbers match. Here is a great 1st Generation SAA sent to New Orleans in 1912!